DLA Piper has reached the heady heights set by the so-called ‘Cravath scale’ with its associate bonus reaching up to $150,000 for associates.

DLA Piper is going further too by reducing the threshold for its associates to reach the extra payments based on their productivity and hours worked.

It is also the largest firm to join the Cravath scale.  The third largest law firm in the AmLaw 100 list with revenues of over $3.1 billion, the firm has profits per equity partner of $2.1 million, The American Lawyer reports.

“The net effect of these modifications are potential bonus awards for our highest-rated and most productive associates of up to 50 percent or more overmarket.” Yowza! Here’s what the bonus scale looks like at DLA Piper: 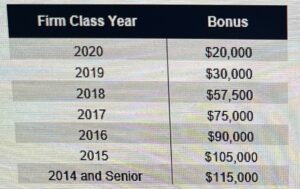 ATL have also reported that it is not just Big Law firms that are announcing major bonuses, but also the major boutiques – or at least some of them.   The commercial litigation boutique Holwell Shuster & Goldberg — founded by Judge Richard Holwell (formerly of the Southern District of New York) and his former White & Case colleagues Mike Shuster, Dan Goldberg, and Dorit Ungar Black — has made its bonus announcements before most of the Big Law firms have done so.
All in all, providing a major piece of good news for associates in the new bonus season.