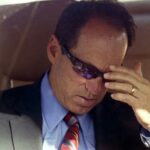 LOS ANGELES– A former senior partner at the accounting firm KPMG LLP has agreed to plead guilty to securities fraud for his involvement in an insider trading scheme in which he provided confidential information to a man who paid him with cash bribes and luxury items.

Scott London, 50, of Agoura Hills, who oversaw KPMG’s audit practice for the Pacific Southwest, was charged today in a criminal information with one count of securities fraud through insider trading. In a plea agreement also filed today in United States District Court, London agreed to plead guilty to the felony count that carries a statutory maximum penalty of 20 years in federal prison.
According to court documents, London provided confidential information about KPMG clients to Bryan Shaw, a close friend of his, over a period of several years. Shaw then used this information to make highly profitable securities trades that Shaw has admitted earned him more than $1 million dollars in illegal proceeds.
“Over the course of several years, Mr. London secretly fed confidential, insider information to a man he knew would use that information to make trades,” said United States Attorney André Birotte Jr. “Behavior like this is an affront to people who follow the law and compromises the public perception in the inherent fairness of the markets by creating an uneven playing field. As a result of his illegal conduct, Mr. London has agreed to plead guilty and will face a lengthy prison term.”
Bill L. Lewis, the Assistant Director in Charge of the FBI’s Los Angeles Field Office, stated: “This case illustrates the FBI’s commitment to investigating insider trading and working to ensure integrity in our financial markets. “We will continue to work with our partners to identify, investigate and prosecute securities fraud cases in order to maintain that confidence in the marketplace.”
London was a senior partner at KPMG who supervised more than 500 accounting professionals at the firm and personally handled audits for major KPMG clients, including Herbalife Ltd. and Skechers USA, Inc. As a result of his position, London had access to confidential information about KPMG’s clients before that information was disclosed to the public. In his plea agreement, London admitted that he disclosed inside information to Shaw regarding at least 14 separate earnings announcements or acquisitions for KPMG clients, including:
Shaw has admitted that he gave London tens of thousands of dollars in cash in exchange for the inside information about KPMG’s clients. According to court documents, Shaw also said that he typically arranged to meet London on a side street near Shaw’s business so that he could give London bags containing $100 bills wrapped in $10,000 bundles. Shaw also said that he gave London a $12,000 Rolex Daytona Cosmograph watch, as well as jewelry and concert tickets, in exchange for the confidential information.
On two occasions earlier this year, acting at the direction of the Federal Bureau of Investigation, Shaw met with London and gave him cash as supposed payment for confidential information about KPMG clients, according to court documents. In the first instance, London met with Shaw on a street corner in Encino and accepted a bag with $5,000 in cash as payment for confidential information about Herbalife’s earnings announcement in February 2013. London later met with Shaw in a parking lot in Woodland Hills and accepted another bag with $5,000 in cash, which was supposedly London’s share of the illegal profits from trades based on confidential information about Decker’s February 2013 earnings announcement.
London is currently scheduled to appear in United States District Court on Friday afternoon for an arraignment, but it is expected that this hearing will be continued to a later date.
Shaw pleaded guilty to a conspiracy charge on May 20 before United States District Judge George H. Wu, who scheduled a sentencing hearing for Shaw on September 16 (for background on Shaw’s plea, see: http://www.justice.gov/usao/cac/Pressroom/2013/063.html).
The criminal investigation into the insider trading scheme was conducted by the Federal Bureau of Investigation.
CONTACT:        Assistant United States Attorney James A. Bowman
Major Frauds Section
(213) 894-2213
Release No. 13-074