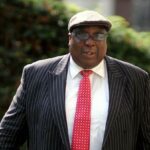 Lawfuel.com – The British tax authorities have claimed another Barrister’s scalp with the jailing of the second barrister for tax evasion charges in less than a month.

This week British barrister Edward Agbaje has been jailed for 18 months for failing to pay more than £80,000 in tax and is the second barrister in less than a month who has faced tax evasion charges.

It comes at a time when the UK tax authorities are cracking down on tax evasion by a number of professions and trades.

In February, former 39 Essex Street QC Rohan Pershad was jailed for three and a half years after being found guilty of VAT fraud.  Abaje, who was bankrupted in 1999 and again in 2008 was found guilty of not paying the tax although he collected £59,000 in VAT on fees.

The Lawyer reports that Agbaje was discovered by the HMRC during a routine VAT visit to his chambers, when it was found that he was continuing to trade using a deregistered VAT number on invoices.

The convictions come after HMRC launched a task force to crack down on tax dodgers in the legal profession in response to specific intelligence (18 September 2012). It is part of a nationwide operation by HMRC, which is looking to recover a total of £19.5m from a number of trades, including grocery and retail in Wales, the North West and South West, hair and beauty in the North East, restaurants in the South East and Solent, and the Scottish motor trade.