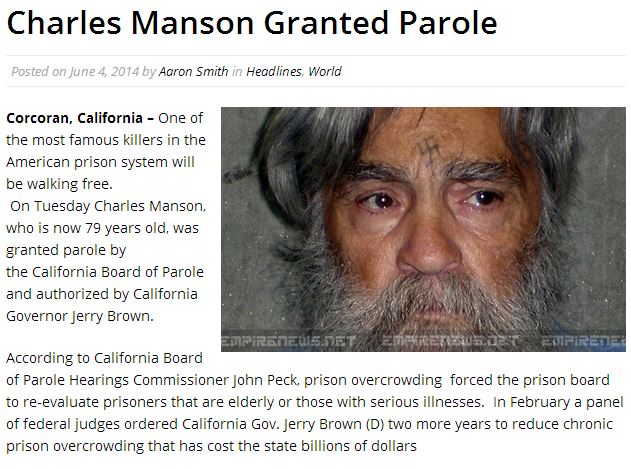 It’s as if the obsession with 79 year old Charles Manson can never die. The latest has been the viral news of his parole, coming from a satirical “news site”, Empire News. But it does nevertheless display a degree of interest in the notorious killer that America won’t let go of.


The suggestion that Manson had obtained parole was not just a hoax, but also another example of Facebook and Twitter’s ability to send hoaxes viral, with the suggestion from Empire News website that the notorious killer had obtain parole by courtesy of California Board of Parole members and the California Governor Jerry Brown.

Epoch Times report that hoax-debunking website Snopes.com says, “By the following day links and excerpts referencing this article were being circulated via social media, with many of those who encountered the item mistaking it for a genuine news article. However, the article was just a bit of satire from Empire News, a web site that publishes fictional stories such as ‘Cure for Cancer Discovered; ‘Amazingly Simple’ Says Researcher,’ and ‘College Student Excused from Classes After Dog Eats Grandmother.’

In 2012, Manson was denied parole in California after he claimed he is “very dangerous.”

“This panel can find nothing good as far as suitability factors go,” said John Peck, a member of the panel at Corcoran State Prison in California, about Manson’s situation, reported ABC at the time.

“I’m special. I’m not like the average inmate,” Peck said at the parole hearing, referring to what Manson told a psychologist. “I have spent my life in prison. I have put five people in the grave. I am a very dangerous man.”

Manson was convicted of seven murders in 1969 in Los Angeles. The killings included five people at actress Sharon Tate’s home.

He was originally sentenced to death after being found guilty, but the sentence was changed in 1977 to “life in prison with the possibility of parole, after a 1972 ruling by the California Supreme Court that determined the state’s death penalty statute at the time was unconstitutional,” ABC reported.