You are here: Home / Lawyers / The Corporate Lawyer, Trying to Change Corporate America

Nudging 80, Robert A G Monks is a corporate lawyer, venture capitalist and corporate director.  He is also still working hard at trying to change corporate America.  From the New York Times. 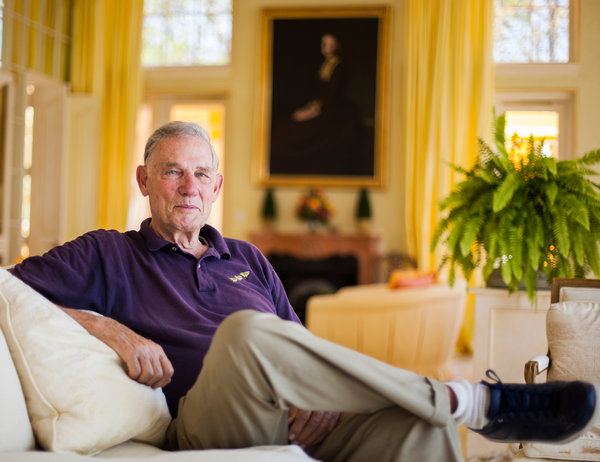 At age 79, many people who can afford to do so are done working. Not Robert A. G. Monks. He is still hard at work, trying to change corporate America.

A Boston Brahmin who has been a corporate lawyer, venture capitalist, energy company executive, corporate director and Reagan administration official, Mr. Monks has an elite background that might have made him a consummate corporate insider. Instead, in his latest book, “Citizens DisUnited: Passive Investors, Drone C.E.O.’s and the Corporate Capture of the American Dream,” he has issued what he describes as “a call to arms.”

Mr. Monks has been battling for decades to make corporations more transparent and more democratic. Toward that end, he has founded companies like Institutional Shareholder Services, the Corporate Library and GMI Ratings, which assess the ways companies are governed. He has lobbied institutional investors to influence the behavior of companies in which they invest. He has also met with presidents, most recently President Obama at a reception in Boston where he tried to enlist support for his cause, without much effect so far.

A slender 6-foot-6, Mr. Monks is imposing but not intimidating, with a courtly manner that seems at odds with the combative language he uses to describe corporate America. Big companies have captured the political system in the United States, he says, and chief executives have captured the corporations, ensuring that the nation is effectively run by a handful of top business managers who pursue their own narrow self-interest.

“The most powerful C.E.O.’s have effectively seized authority over a vast range of America’s corporate resources,” he wrote, “and through those resources over the nation itself without assuming any responsibilities of dominion.”

For Mr. Monks, corporate governance centers on several main issues, including executive pay, corporate compatibility with the public interest and management’s responsiveness to shareholders. He admires people like Ralph V. Whitworth, a founder of the private investment group Relational Investors, who, he says “has set a model for constructive shareholder activism.” Mr. Whitworth’s approach has been to accumulate a stake in a public company, perhaps only 1 percent, and then fight his way onto the board, where he pushes for a change in corporate strategy.

In 1999, Mr. Whitworth became acting chairman of Waste Management, helping it recover from an accounting scandal. A Hewlett-Packard shareholder, he joined its board in 2011 and became interim chairman earlier this year, amid a turnaround effort at the company.

Although ownership in the stock market today appears more widely dispersed than ever, individuals have been exerting less control over companies, Mr. Monks said. For instance, many millions of Americans hold stocks through mutual funds, representing by far the largest ownership block among institutional investors. As a purely legal matter, mutual funds have significant power to influence all aspects of corporate governance. In practice, though, the funds have tended to be hands-off, passive investors.

“It’s critical that mutual fund investors require the trustees of their accounts to act like stewards of each company they hold in their portfolio,” he said. “Many mutual fund companies are equipped to do this.” Those that aren’t should be responsive when researchers point out current problems. “When a corporate governance issue comes to light,” he said, “they need to be involved.”

HE also contends that others among the nation’s biggest investors — charitable funds and endowments — need to play more active roles. In his book, he argued that if excessive executive pay was to be curbed, it was important that the trustees of the top dozen endowments and charitable funds, accounting for $200 billion in collective assets, actively take a stand. “These are flesh-and-blood individuals who can actually do something,” he said.

Mr. Monks comes from a patrician New England background. With his wife, Millicent — a great-granddaughter of Thomas Carnegie, the younger brother of Andrew Carnegie — he lives on a private island off the coast of Maine, from which he wages his battles against today’s corporate titans.

A self-described education snob, highly attuned to the background and credentials of those he meets, he earned a bachelor’s degree at Harvard, did graduate work at Cambridge in Britain and then returned to Harvard for his law degree.