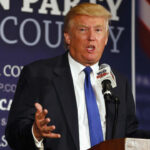 Donald Trump has his dander up over the lawsuit launched by New York’s State prosecutor over the bona fides of his Trump University, setting up a blaze of Twitter and TV responses calling NY Attorney General Eric Schneiderman “pathetic” and “a total failure in office”.  But is the school a scam, or not?
[wp_ad_camp_2]
Schneiderman announced on Sunday he was suing the star of The Apprentice television show for allegedly swindling people into paying hefty fees at his Trump University to learn his investing techniques.

“More than 5,000 people across the country who paid Donald Trump $40 million to teach them his hard-sell tactics got a hard lesson in bait-and-switch,” Schneiderman said in a statement.

“Mr Trump used his celebrity status and personally appeared in commercials making false promises to convince people to spend tens of thousands of dollars they couldn’t afford for lessons they never got.”

Trump – who made his fortune in real-estate – has become known for his Twitter tirades, many of which are scathing attacks on the Obama Administration.

The billionaire magnate yesterday accused Schneiderman of soliciting him for campaign funds and seeking publicity.

On Fox and Friends he called Schneiderman a “political hack”, and on the Today show, a “total lightweight”.

“During the investigation, he was asking people in my firm, including one of my lawyers, for campaign contributions,” Trump told the Today show.

“Who ever heard of this? He’s asking for campaign contributions while he’s looking into Trump. I mean what kind of an attorney general is this?”

Schneiderman accused Trump of misrepresenting the course offered, promising students would learn from hand-picked experts and “just copy exactly what I’ve done and get rich”.

He said in the statement that Trump had not chosen any of the instructors and had very little or no role in developing content for the course.

“Instead of a personal appearance from Donald Trump as some consumers were led to expect, some participants got their photographs taken with a life-size photo of Mr Trump.”

Trump University, which opened in 2005, was also unlicensed to operate in the state of New York, according to Schneiderman.

Students signed up for a $US1,495 three-day seminar during which they were promised they would learn everything they needed to know to become successful real estate investors.

Schneiderman said these promises went unfulfilled and the seminars were used to pitch consumers an expensive Trump Elite mentoring program costing $US10,000 to $US35,000.