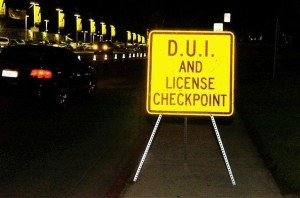 Driving under the influence is considered a very serious crime all over the United States. Committing it can actually result in a person’s right to drive being stripped away from them.

Anyone out on the streets intoxicated may get arrested for DUI, but the likelihood of this occurring increase exponentially if an individual comes across a DUI checkpoint. In fact, some individuals may even face false DUI charges due to these stops, so it’s important for every driver to know their options when stopped at a checkpoint.
[wp_ad_camp_1]
Are DUI Checkpoints Constitutional?

The Constitution of the United States protects individuals from unreasonable searches and seizures. For a person to be stopped by police, for instance, the authorities must have probable cause that a crime has occurred. Sobriety checkpoints, though, basically completely ignore this. Individuals are stopped without any probable cause and basically subjected to a drunk driving investigation.

In addition, if police believe that a person is intoxicated, they will likely ask for a Breathalyzer sample. This action closely resembles a violation of a person’s constitutional right to not incriminate themselves.

Unfortunately for some drivers stopped at checkpoints, the Supreme Court has decided that these violations are necessary for the safety of the public, and in doing so, they made DUI checkpoints completely legal.

Options at a Checkpoint

There are actually several states that still outlaw random sobriety checks, but in the states that don’t, it’s important for a person to know their rights. The first thing to point out is that police still cannot search a vehicle unless they have probable cause, so any request from authorities to perform a search should be responded to with a polite “no.”

Drivers also have the right to refuse Breathalyzer and field sobriety tests, but the outcome of putting forth these rights can vary by state. Unfortunately, police who ask a person for these tests likely already believe that a person is under the influence. Simply refusing these tests doesn’t mean that a person won’t get arrested. If an officer believes a person is intoxicated, they can make an arrest even in the absence of direct sobriety evidence.

Those who choose to refuse a Breathalyzer need to know that they will likely lose their license for their refusal. This is because a person has basically rescinded the implied consent to a Breathalyzer test that they granted when accepting a state driver’s license. A lack of Breathalyzer and field sobriety test evidence can make it more difficult to convict, but numerous DUI convictions have occurred even in the absence of this evidence.

The Aftermath of an Arrest

If police believe that a person is under the influence at a DUI checkpoint, they will ask the individual to pull over to the side of the road and perform sobriety tests. Regardless of whether a person performs these tests or not, they’re likely to be arrested if police believe they’re intoxicated. A person should never admit to being intoxicated.

In fact, the individual actually has the right to refuse to speak at all if they wish. Yes, this will make officers suspicious, but they’ll get no incriminating verbal evidence in this way.

It should also be noted that a DUI arrest, failed field sobriety test or even a failed Breathalyzer test doesn’t constitute an automatic conviction.

There are actually several defenses to DUI charges, and when an inherent violation of civil liberties has occurred due to a sobriety checkpoint, the chance of a person getting by without overly serious consequences is even more pronounced. In these cases, it’s essential that a person seek out legal help. You can search DUI attorney Orlando online for advice on how to handle such a situation. Prosecuting attorneys won’t let a person know if their rights were violated or not, so it’s essential for that individual to have an experienced attorney on their side.

Police checkpoints walk a fine line between legality and violation of civil liberties. There’s no doubt that these checkpoints trample on a few basic liberties, but the Supreme Court has decided that these minor inconveniences are okay since they have the effect of removing drunk drivers from the streets. Regardless of a person’s beliefs on the issue, the fact remains that DUI checkpoints are legal in many states, so knowing the aforementioned information is vital in these areas.