Kelly Blazek has been described as a “passionate advocate” for those seeking work.  But when her rejection note to someone seeking a bank job received a note that went vitriolic and viral at the same time.  How can you avoid the “Blazek effect” when you write or send a rejection email or letter?

But first, let’s look at what happened with Kelly Blazek, the woman who runs a job bank list and calls herself a “passionate advocate” for people seeking work and yet forwarded a rejection note when her brain apparently exploded.

listings and also to connect with her via LinkedIn and CNN lead to a response described by Blazek as Blazek wrote:

“Wow, I cannot wait to let every 26-year old jobseeker mine my top-tier marketing connections to help them land a job.”

“I suggest you join the other Job Bank in town,” she wrote to the young woman who was just moving to Cincinnati. “Oh wait– there isn’t one

The NY Post reports that Kelly Blazek, the group’s self-described “House Mother” and communications professional, has scrubbed all traces of herself from the Internet after the web erupted when her vitriolic emails went viral.

It all began when Diana Mekota wrote Blazek about her qualifications so she could use the listserv to find a job after relocating to the Ohio city from Rochester, N.Y., the Cleveland Plain Dealer reported.

But Blazek, who once said she wanted her “subscribers to feel like everyone is my little sister or brother, and I’m looking out for them,” instead wrote back with a scathing email telling Mekota off – big time. 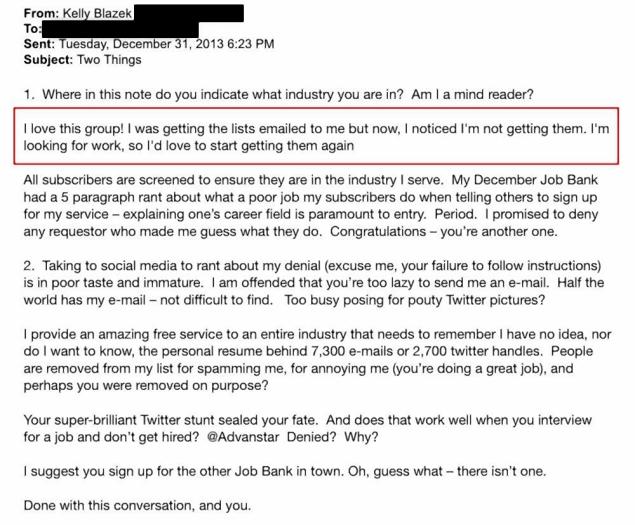 To avoid attracting the viral negativism that Blazek has achieved with her one simple rejection post, it is to follow one simple rule if you’re a business owner:  Don’t send rejection letters.

But if you must, then consider the five steps set out in the FindLaw Small Business blog, which are as follows: