You are here: Home / Latest News / Law Firm Revenues Up – By A Slight Margin, Says Survey 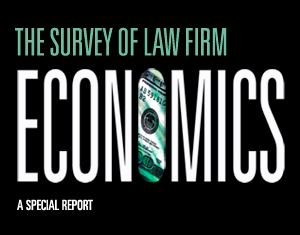 Law firm revenues for small firms are up.  Revenues for smaller firms are down.  That’s the long and short of it as revealed by the Survey of Law Firm Economics undertaken by the National Law Journal and ALM, showing a small improvement in the profits-per-lawyer figure – up by 0.3 per cent, which bettered the 2011 decline of 4.2 per cent.

See the story at the law.com site:

Overall, per-lawyer revenue inched up by 1.1 percent at law firms of all sizes during 2012 — welcome news compared with 2011, when it sank by 4.3 percent.