George Clooney’s wife Amal Alamuddin might be in favour with her famous husband, but she’s distinctly out of favour with the Egyptian government, who have slammed the human rights lawyer for claiming that she had been threatened with arrest if she publishing a highly critical report about judicial corruption. 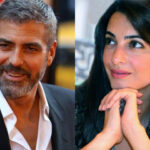 It’s a major controversial for the high profile lawyer who only recently celebrated her wedding to heartthrob Clooney and has continued to accelerate her human rights legal career.

“We have nothing against her,” Interior Ministry spokesman, Hani Abdel Latif, said Sunday. “She should say exactly who said that. Why not specify from the start who told her that?”

Ms Clooney spent a week in Egypt last year as part of an investigation into the country’s policy of allowing government officials to handpick judges and influence prosecutions.

That system, Clooney said, led to the convictions of three Al Jazeera journalists.

Last week she created a major controversy in Egypt with her claims.

“When I went to (release) the report, they stopped us from doing it in Cairo,” she told the Guardian newspaper.