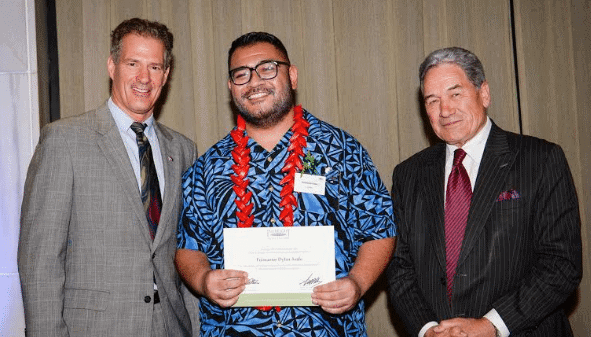 A desire to understand and redress society’s worst inequalities is what drives University of Auckland academic Fuimaono (Dylan) Asafo.

With this in mind, the twenty-six year-old Teaching Fellow from Auckland Law School is heading to Massachusetts next month, assisted by a Fulbright Scholarship, to undertake a Masters of Law at Harvard. Of Samoan heritage, Dylan plans to study Critical Race Theory and minority rights.

The US Awards valued at up to US$40,000 (plus NZ$4,000 travel funding) are for promising New Zealand graduate students to undertake postgraduate study or research at US institutions in any field.

He began tutoring law students several years ago, was formerly the president of the Pacific Islands’ Law Students Association, and helped establish the MALOSI Project (Movement for Action and Law to Overcome Social Injustice).

He credits his mum Liliu Faletoese Asafo for influencing his choices. “Mum left her village of Siumu, in Samoa, when she was 19 to take up a nursing scholarship in New Zealand. She has always been interested in the law as well as healthcare. I combined these topics of study for my undergraduate degree because they are both areas that have failed Pacific people,” he says.

One component of Dylan’s new area of study, Critical Race Theory, will see him analyse race and racism from a legal point of view.

“Critical Race Theory recognises that racism is engrained in the fabric of society and is pervasive in dominant culture, including its laws. Many systems in New Zealand fail minority groups, particularly Māori and Pacific people. It is vitally important that we do more than just acknowledge this. We need the tools to identify the socially constructed framework that upholds injustice, in order for us to bring about change,” he says.