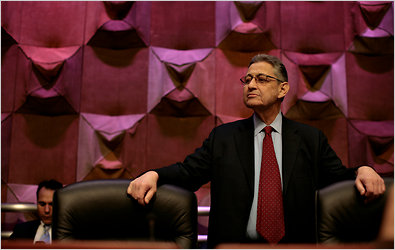 Part-time law work may pay well for some,but for members of New York’s State Legislature it can earn people like Assembly speaker Sheldon Silver (pictured) up to $450,000 a year.


According to financial dislosure filings released this week under the state’s new ethics law, part time work with law firms has been a major earner for several legislators.

Silver works part time for the Manhattan personal injury law firm Weitz & Luxenberg the asbestos and mesothelioma lawsuit law firm and the new ethics law requires incomes to be disclosed within a range and without the previous redactions.

Mr. Silver, a Manhattan Democrat who has been speaker since 1994, has long been known to work at Weitz & Luxenberg, though his actual job and pay have long been shrouded in mystery.

His filing said that his job consisted of “general practice of law with emphasis on representation of individual clients and personal injury actions,” and his title is of counsel.He reported an ample fortune on his new filing, including 2012 income for him and his wife of at least $763,000 and potentially more than $1.1 million, including his legislative salary of $121,000.

Mr. Silver also has an investment portfolio that was worth $778,000 to $2 million at the end of last year, according to his filing, and included blue chips like Oracle and Disney.Mr. Silver also reported deferred compensation plans and trusts that hold about $1.8 million to $2.3 million. A portion of his income last year came from securities sales, including a sale of Ford stock, which brought income of at least $150,000.

He also had an outstanding loan of at least $500,000 that he extended to Counsel Financial, a company to which he has lent money before, which helps finance small law firms that specialize in personal injury lawsuits. Mr. Silver and his wife also earned interest income of at least $100,000 last year from Counsel.Mr. Silver was one of a number of lawmakers who earned outside income practicing law.

The Republican leader in the Senate, Dean G. Skelos of Long Island, reported law firm earnings of $150,000 to $250,000. He works for the Long Island law firm Ruskin Moscou Faltischek, and described his work as general law practice that included civil litigation and work related to real estate, health care and corporate matters.

Mr. Skelos and his wife also reported a portfolio of more than two dozen stocks and mutual funds.

Also reporting law firm income was Senator Jeffrey D. Klein, a Bronx Democrat who leads a breakaway faction of Democrats that formed a ruling coalition with Senate Republicans. Mr. Klein is a partner at the law firm Klein Calderoni & Santucci in the Bronx. He reported income of $57,000 to $106,000 associated with his legal work and a teaching position at Mercy College.