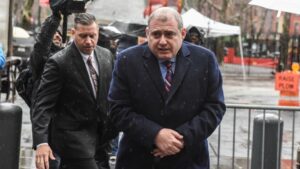 Damian Williams, the United States Attorney for the Southern District of New York, and Michael J. Driscoll, the Assistant Director-in-Charge of the New York Field Office of the Federal Bureau of Investigation (“FBI”), announced the unsealing of an indictment against ANDREY MURAVIEV, a/k/a “Andrey Muravyov,” a Russian citizen, charging him with making illegal political contributions as a foreign national, and conspiring to make illegal political contributions as a foreign national in the names of straw donors.  Muraviev is charged with conspiring with Lev Parnas, Andrey Kukushkin, and Igor Fruman, and others, who were convicted at trial or have pleaded guilty to these crimes.

U.S. Attorney Damian Williams said: “As alleged, Andrey Muraviev, a Russian national, attempted to influence the 2018 elections by conspiring to push a million dollars of his foreign funds to candidates and campaigns.  He attempted to corrupt our political system to advance his business interests.  The Southern District of New York is committed to rooting out efforts by foreigners to interfere with our elections.”

FBI Assistant Director-in-Charge Michael J. Driscoll said:  “As alleged, Muraviev, a Russian foreign national, made illegal political contributions and conspired with Parnas, Kukushkin and Fruman to obscure their true source.  The money Muraviev injected into our political system, as alleged, was directed to politicians with views favorable to his business interests and those of his co-conspirators.  As today’s action demonstrates, we will continue to aggressively pursue all those who seek to illegally effect our nation’s elections.”

As alleged in the indictment against MURAVIEV and as proven during the trial against his co-conspirators:

In the spring of 2018, MURAVIEV, Kukushkin, Fruman, and Parnas decided to launch a business aimed at acquiring retail cannabis and marijuana licenses in the United States. As part of that plan, MURAVIEV agreed to wire $1 million, through a series of bank accounts, to Fruman and Parnas to fund hundreds of thousands of dollars in political contributions they had made or promised to make before the elections in November 2018.  The purpose of the donations was to curry favor with candidates that might be able to help MURAVIEV and his co-conspirators obtain cannabis and marijuana licenses.

MURAVIEV’s money was used to reimburse and fund federal and state political donations in Florida, Nevada, and Texas, and MURAVIEV also agreed that the funds would pay for donations to politicians in New York and New Jersey. MURAVIEV traveled to Nevada as part of these efforts, and received regular updates from Kukushkin about the co-conspirators’ progress politically. To obscure the fact that MURAVIEV was the true donor of the money, the funds were sent to a business bank account controlled by FRUMAN’s brother, and then the donations were made in FRUMAN’s and PARNAS’s names.

MURAVIEV is believed to be in Russia and remains at large.  The case is assigned to Southern District of New York U.S. District Judge J. Paul Oetken, who presided over the trial of Parnas and Kukushkin.

Mr. Williams praised the outstanding investigative work of the FBI and its New York Field Office.

This case is being handled by the Office’s Public Corruption Unit.  Assistant U.S. Attorneys Rebekah Donaleski, Aline R. Flodr, Nicolas Roos, and Hagan Scotten are in charge of the prosecution.

The charges contained in the Indictment are merely accusations.  The defendant is presumed innocent unless and until proven guilty.