An enraged Saudi wife who recorded her husband sexually assaulting a servant and who posted the video clip online, is now facing significant legal penalties herself, in the true spirit of what life is like in Saudi Arabia.

The man forces himself upon the domestic worker, who is seen struggling and crying out. His wife’s video prompting a hashtag “Saudi woman exposes her cheating husband” that has been shared across the Net.

All this at a short time after the UN’s farcical appointment of a Saudi to head the human rights appeal, from a country that is unquestionably one of the major human rights violators in the world. 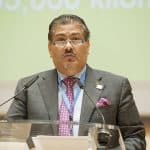 Article 55 of the United Nations Charter demands: ‘Universal respect for and observance of human rights and fundamental freedoms for all, without distinction as to race, sex, language or religion.’ Faisal Bin Hassan Trad, Saudi Arabia’s envoy to the UN Human Rights Council, was appointed as Chair of an influential human rights panel. The appointment was seemingly made in June, but only came to light on 17 September, due to documents obtained by UN Watch.

Make our own mind up.