Taylor Swift and her legal team have never been slow to react to perceived rip offs of Swift’s music.

The Kanye West ‘fame’ video is supposedly made with the consent to lyrics that had been cleared by Swift, but not according to the popster’s lawyers who quickly sent a cease and desist letter.

“Kanye did not call for approval, but to ask Taylor to release his single ‘Famous’ on her Twitter account,” a publicist for Swift said in a statement after the song was released. “She declined and cautioned him about releasing a song with such a strong misogynistic message.”

Taylor Swift hires lawyers who are hardly afraid to issue proceedings to protect their client’s intellectual property – or any property.

And it’s not just Taylor Swift who may be firing lawsuits, but others too who have variously been described as “horrified”, “pissed” and “livid”.

People like Donald Trump is highly litigious, as are other ‘naked celebrities’ in the video.

Kanye West claimed that he had cleared the lyrics with Swift beforehand, and his wife Kim claims to have her on tape approving the content of the song that prompted the legal letter.

You may remember that during the MTV Video Music Awards  the rapper jumped onstage during Swift’s acceptance speech to inform the world that Beyoncé, who was not in the bed of naked celebrities,had “one of the best videos of all time.” 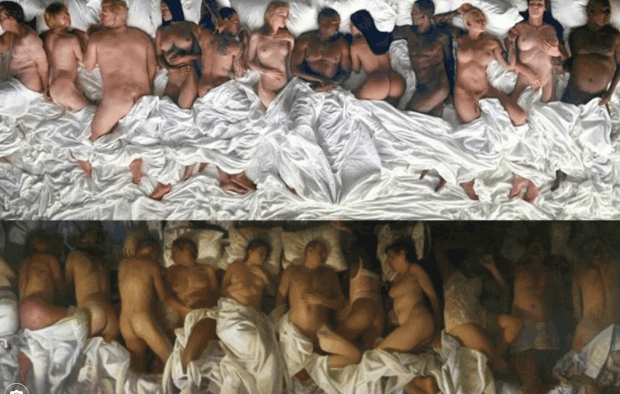 Days later, Swift fired back at West during her Grammy Awards acceptance speech more directly, saying, “As the first woman to win Album of the Year at the Grammys twice, I wanna say to all the young women out there: There are going to be people along the way who will try to undercut your success, or take credit for your accomplishments or your fame, but if you just focus on the work and you don’t let those people sidetrack you, someday when you get where you’re going, you’ll look around and you’ll know that it was you and the people who love you that put you there, and that will be the greatest feeling in the world.”

If you’re not watching the video, at least watch this space.  It appears that the all-time video hit could be seen in court as much as anywhere else.

Should Kanye feel the Swift’s wrath – along with others?  Time will tell.