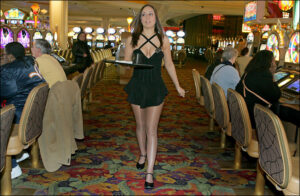 New Jersey judge Nelson Johnson regards the Atlanta City Borgata Hotel Casino & Spa cocktail waitresses as being “sex objects” rather than cocktail waitresses, a view maybe enforced by the fact that the casino itself refers to them as the “Borgata babes”.  But last week the babes, who took a lawsuit against the casino, lost their case, which argued that they were discriminated against on the grounds of weight and sex.


Their job description is “part fashion model, part beverage server, part charming host and hostess. All impossibly lovely.” When the Borgata hires a new babe, it puts her on the scale, then requires her to weigh in periodically throughout her career to ensure that her weight does not increase by more than 7 percent of her initial poundage. If it does, the casino reserves the right to suspend the babe until she slims down, reports the HeraldOnline

Male servers at the Borgata, they said, are not judged on their babeliness, or their poundage. But Judge Johnson found that the Borgata’s requirements were legal because the babe label was applied to a waitress with “that person’s participation.” He wrote, “Plaintiffs cannot shed the label ‘babe’; they embraced it when they went to work for the Borgata.” If you take a job as a babe, you better stay a babe. Even if the casino admits that its standard for loveliness is an “impossible” one.

The case shines a spotlight on the lingering acceptability of weight discrimination in the American workforce: Michigan is currently the only state to explicitly bar discrimination based on weight and height, thanks to a 1976 law meant to protect the jobs of female workers regardless of their size. “That’s a horrible ruling,” Michigan disability rights attorney Richard Bernstein said of the case. “That decision gives employers a tremendous power over people in the workplace.” But the ruling also raises questions about the role of babes in workplaces across the country.

It’s conventional wisdom that male gamblers will keep pulling away at the slots as long as they’re lubricated by strong drinks served up by babely women. But wouldn’t some female patrons prefer to be served be hunky pieces of man candy? And couldn’t most workplaces argue that its jobs are better performed by babes, regardless of the venue? Is it OK to require that strippers be babes? Casino waitresses? How about investment bankers?

While the Borgata babes are heading back to the scale, three women who worked for Merrill Lynch have filed suit against the company for sexing up their own job descriptions. The women allege that their employer forced them to attend female-only seminars on how to dress, to act “perky,” and to read a book called “Seducing the Boys Club: Uncensored Tactics From a Woman at the Top” (and to attend a mandatory lecture by the book’s author).

The book counsels women to stage workplace interactions with their coworkers that play out like “great sex.” It tells women that it’s “important to reinforce his hunk status,” to tell him “I love you,” and to use comments like “Wow, you look great. Been working out?” to curry favor among their male peers. That last line, the book says, ought to be applied to any male coworker who is not “morbidly obese.” Male Merrill Lynch employees may not be hired based on their bodies, but it was apparently the job of female employees to insist on their inherent babeliness. The case was recently refiled in state court after a similar federal suit was dismissed.

Read the rest of the HeraldOnline report here.