Former senior UK Cabinet Minister Sir Geoffrey Cox QC has created a furor in the UK  for his lawyer earnings over what was described as his ‘moonlighting’ legal work, which earned him more than £5.5 million ($7.7 million USD) since 2009.

The British media, including the Daily Mail, revealed how he had spent 10,700 hours in his second job since 2009, devoting almost 30 hours a week to legal work for £500 an hour ($670 USD).  Sir Geoffrey Cox is lead barrister at London’s Thomas More Chambers.

The senior QC’s earnings would have been considerably higher had it not been for the inconvenience of his also being Attorney General for a year and a half.  He had also spent a further four years in the House of Commons when the payment details were not required and are therefore unavailable.

Sir Geoffrey’s recorded £5.51 million outside earnings would have been far higher had he not spent a year and a half as Attorney General – or if it included similar income from his first four years in the Commons when MPs were not required to give details of such pay.

He has been an in-demand barrister for many years, handling criminal trials and advising foreign governments among other work he has handled.

The politician spent time in the British Virgin Islands earlier this year while working for City law firm Withers.

But despite being over 4,000 miles away from Westminster he was still able to cast votes in the Commons due to the proxy voting system put in place during the height of the pandemic.

The register of financial interests that the Daily Mail and others have reported shows he received £156,916.08 from Withers for work undertaken between 29 April and 31 May, 202 – totalling 140 hours.

The Daily Mail provided details on the source of his legal earnings in a table, below – 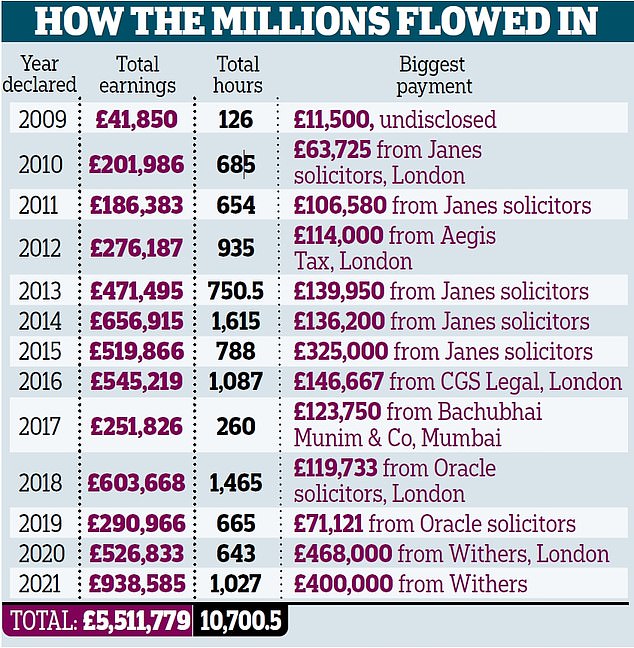 Some of the earnings came from tax law work where he handled some work in an anti-corruption drive after he had successfully defended the former Cayman Islands premier McKeeva Bush in corruption charges.

A video has emerged of Sir Geoffrey sitting in his Commons office while participating remotely in a commission of inquiry, in apparent breach of rules that ban MPs from using their publicly funded offices for non-parliamentary work.

A statement from his office said: ‘As for the allegation that he breached the parliamentary code of conduct on one occasion, on September 14, 2021, by being in his office while participating in an online hearing in the public inquiry and voting in the House of Commons, he understands the matter has been referred to the Parliamentary Commissioner and he will fully co-operate with her investigation.

He does not believe that he breached the rules but will of course accept the judgment of the Parliamentary Commissioner or of the committee on the matter.’

He carried on with his profession after being elected as the Conservative MP for Torridge and West Devon in 2005. Initially, his entries in the Register of Members’ Financial Interests simply declared that he earned money from ‘Practice at the Bar of England and Wales’.

But starting in 2009, as the rules were tightened, he was required to provide details regarding everything he earned as a senior barrister.

Among those who believe the merits of someone of Sir Geoffrey Cox’s experience is leading legal influencer Joshua Rozenberg who wrote in a substack column that Sir Geoffrey should stand firm and retain his role.

This breadth of experience is particularly important in the law. Our system relies on having three law officers in parliament — attorney general, solicitor general and advocate general for Scotland — who are seasoned politicians as well as being experienced lawyers with sound judgement.

I have written before about how, in recent years, this principle has been honoured more in the breach than the observance. Law officers like Cox and Dominic Grieve QC were sacked for giving advice that prime ministers did not want to hear. Lord Keen of Elie QC resigned instead.

It is highly desirable — though now very challenging — for legal professionals to continue working in the law after they have entered parliament. It’s not just that they need to keep in touch with the problems facing the justice system. They should continue honing their legal skills so that if they are suddenly thrust into the law officers’ department and made QCs — as Alex Chalk was this year — they are in the best possible position to give the government robust, independent advice.

Barristers’ Earnings in the UK

Senior barristers in Britain are among the best remunerated lawyers in the country, leading to a demand for roles in the sought-after Chambers. In terms of lawyers earnings, what do they actually earn on average?

Is the Geoffrey Cox ‘scandal’ one that should create breathless excitement among those looking at the figures relating to his legal earnings? Or is it the sort of money that any senior barrister would make, hardly warranting the politically motivated attacks that have been reported?

Compared to lawyer earnings in corporate law and elsewhere, the money earned by the politician might be seen by some to be relatively paltry over the 12 years.

Barristers are self employed with clerks who pitch their work and assessing exactly what their legal earnings are can be difficult, until lawyer earnings are ‘exposed’ in cases like Sir Geoffrey Cox, or in cases like Jonthan Sumption who was paid £10 million prior to his elevation to the Supreme Court. The amount, relating to his representation of Roman Abramovich, appears grossly exaggerated but nevertheless reliable sources indicate it was not less than one-third that amount.

There is certainly no shortage of successful barristers with luxurious country estates and second homes in France, Italy or anywhere else.

The demand for top work and top money from lawyers at the top of their game has always created high interest. The Geoffrey Cox issue is one that has excited that interest all over again – largely because of his political role and perceived conflicts of interest – rightly or wrongly.