On November 6, 2019, Rudy Giuliani tweeted he had retained Pierce Bainbridge Beck Hecht & Price LLP for representation related to the Ukraine fiasco.  At the time, Pierce Bainbridge had around thirty partners; just a few months later that number has been cut in half.  Just before the onslaught, firm founder and then managing partner John Mark Pierce took to LinkedIn and announced to his 30,000 connections one of his endless fantasy-fueled statements of big things for 2020. In reality, major cracks in the Pierce Bainbridge façade had already started forming.

The actual complaint is really bad. It’s laughable, and the lawyers who signed their names to it — Brian Dunne, Dan Terzian, and David Hecht, from Pierce Bainbridge — should be embarrassed. Of course, Dunne and Terzian also filed the silly case against Google, so I’m guessing they don’t much care about their own reputation as lawyers.

Less than three months later, David Hecht is no longer with Pierce Bainbridge.  Dan Terzian remains with the firm as a partner and has the additional title of “Chief Emoji Officer.” Finally, as reported by Emily Birnbaum in The Hill,  Tulsi Gabbard’s “silly case against Google,” was thrown out.

The Giuliani retention remains shrouded in mystery, perhaps it is simply on the basis of friendship; John Pierce claims that he and Rudy are “good friends.”

Presumably, neither Rudy nor Tulsi, were aware of the lawsuits of ex-firm partner, and double Harvard graduate, Don Lewis.  Mark Mukasey, son of General Michael Mukasey who was appointed US Attorney General by former US President Ronald Reagan, and a long-time colleague of Giuliani — they were law firm partners together for years at Bracewell Giuliani and Greenberg Traurig — is lead counsel for Pierce Bainbridge in the Lewis lawsuits.

Illustrative of the general closeness of the Mukasey-Giuliani relationship, Erik Larsen of Bloomberg News  has reported:  “Rudy Giuliani said he was forced to borrow $100,000 from President Donald Trump’s lawyer Marc Mukasey to pay his taxes . . .”

The gist of Lewis’s claims is that he blew the whistle on financial misconduct and Pierce Bainbridge, with the support of Pierce’s confidante Lauren Schaefer Green, Michael D. Yim of Putney Twombly and eventually S. Jeanine Conley of Littler Mendelson, weaponized MeToo to demonize Lewis and cover-up for financial misconduct.

About That “2020” Ride and “Best Individual in America” Marc Mukasey

Harkening back to his LinkedIn post, 2020 does look like it will be “quite a ride” for Pierce, but the ride will not be related to firm success; rather Pierce dealing with (i) at least four lawsuits, (ii) reported $1.5 million in outstanding tax liens, (ii) $21,000/month alimony obligations, (iii) potential license suspension or more, and (iv) the possibility of criminal liability for Pierce, and potentially certain of his partners.

The law firm Pierce founded is imploding in real-time, around thirty-five attorneys have quit, and LawFuel recently learned that at least two more associates are out:  Yi Wen Wu (formerly of Alston & Bird) and Melody McGowin (formerly of McKool Smith).

As it turns out, five months before Giuliani retained Pierce Bainbridge, Mukasey joined Team Pierce, as reported by Jack Newsham of Law.com in the New York Law Journal.

Not unlike thirty-five ex-Pierce Bainbridge attorneys, however, Marc Mukasey, who Pierce refers to “as one of the best trial lawyers and individuals in America,” and whom Pierce is “extremely proud to know,” has rejected  Pierce Bainbridge and is seeking the court’s permission to abandon his representation of the firm. Mukasey recently filed a motion to withdraw as counsel in the Lewis litigations citing ethical concerns with continued representation; Lewis’s short response to the Mukasey withdrawal application suggests extremely severe issues at the firm.

With Tulsi Gabbard, there is no discernible connection to Pierce or Pierce Bainbridge, and it’s unclear why the Hawaiian Congresswoman would hitch herself to the Pierce Bainbridge crazy train.

Adding to the mystery, Gabbard has a strong women’s rights platform.  John Pierce, on the other hand, has referred to women – in writing – as “chicks” who are “fu*cking whack jobs,”along with other similarly insulting aphorisms.

The firm’s bookkeeper – in writing – opined, in connection with a search for a Chief Financial Officer: “John has female abandonment issues. Likely will only respond to a guy.  He’s going to make it very difficult for a CFO to do their job, unfortunately.”

The firm’s current CFO is Kevin Cash, (pictured left) he joined from Orrick, Herrington & Sutcliffe, LLP, in around in May 2019.

Incredibly, in a message to the entire firm, Pierce praised a judge for his “sexist and verbally abusive” conduct in dealing with female attorneys.

The firm’s web page use to tout “$3 Billion recovered for clients,” by aggregating  cases from years prior to the firm’s existence (for example, listing 2002, 2006 and 2010 cases while Pierce Bainbridge was founded in January 2017).

Even this January, under immense scrutiny, and with the firm already beginning to crater, firm founder John Pierce opined.

It is part and parcel of what has consistently shown itself to be at best, over-the-top hyberbole and, at worst, routine dishonesty of Pierce and Pierce Bainbridge.

“Children of the Firm”

“On several occasions, Pierce expressed joy at the prospect of “taking the children’s” names off the door  ~ Don Lewis Complaint, May 16, 2019

A surface level analysis may suggest the on-going Pierce Bainbridge  implosion is tied to Giuliani becoming a client. In our view, this would be incorrect; at least six partners had quit a month before Rudy was in the fold, each just a few months after joining the firm.

One departee was Deborah Renner (Renner Law), who as reported by Jonathan Stempel in Reuters, during her time at BakerHostetler was closely involved in unwinding the fraud of Bernie Madoff.  Another was Michael Winograd, a former candidate for President of the United States National Soccer Team, and who remarked, after leaving Pierce Bainbridge for Brown Rudnick, about his pleasure in joining a “true partnership,” a clear dig at Pierce and the firm.

A more reasonable view is that the problems at Pierce Bainbridge derive from the perceived dishonesty and ethical lapses of Pierce and some of his partners.

For example, in 2003, Pierce ran for office in Allegheny, Pennsylvania, his opponent – then Allegheny County Treasurer John Weinstein – referred to Pierce as “unprofessional” and “childish.”  Similarly, in February of this year, the President of a former client who reported Pierce and the firm to the California State Bar, requested Pierce’s response to a “simple [email] request” for information to be “devoid of any of your [Pierce’s] dismissive, arrogant, angry, childish outbursts. . .”

This lack of professional maturity appears to extend to other firm partners; a scathing letter Lewis sent in July 2019 challenged his former partners to “act like an independently minded, professional, adult attorneys.” None of them responded.

The Roll Call of Defendants

Pictured below are former partner and defendants as well as Caroline Polisi, Eric Creizman and Melissa Madrigal, the latter three are all now with Armstrong Teasedale.  (Lewis expressed surprise that Polisi recently joined Creizman at his new firm.)

Lewis remarked in no uncertain terms his views on his former partners, based upon his own treatment by his former firm, saying:  “Caroline Polisi is a perfect example of the greed and lack of conscience of my former partners.  Caroline waxed poetic in a CNN article about the importance of ‘due process.’ Caroline, like the rest of my partners, were informed in writing that Michael D. Yim of Putney Twombly claimed I was not entitled to any ‘due process’ during his sham investigation [into allegedly false allegations of misconduct]; Polisi ignored the letter and never spoke with me again.

An excerpt from a Polisi February 2018 column in CNN.com:

Playing off Polisi’s “thriving, in fact” statement, a Lewis Complaint states:  “At Pierce Bainbridge, with Putney Twombly’s help, ‘due process’ was dead for Lewis.  And neither Polisi, nor any of her partners, who were on notice, cared.”

“Pierce Bainbridge recently asked me to drop Polisi as a defendant because ‘we just realized she is paid W-2.’  The firm is financial house of horrors,” Lewis claims.

Lewis continued:  “Same for all of my former partners.  Mukasey has repeatedly pushed for us to drop all of them from the case.  It shows fundamental misunderstanding of my claims, and a fundamental misunderstanding of applicable law.  These people had a fiduciary duty to me – the “utmost duty of care” – and they showed me none. For all of my former partners, sucking up to John Pierce and his potentially criminal ways was of paramount importance; he was writing their paychecks.”

Not Getting Their Money’s Worth

The firm’s relationships with Tulsi Gabbard and Rudy Giuliani are steeped in ambiguity, but one thing seems clear, neither Rudy nor Tulsi have gotten their money’s worth.  This of course, assumes Giuliani has paid a dime. The firm represented George Papadopoulos, but only shortly after his wife solicited pro bono services on Twitter – the Twitter post, with an unfortunate grammatical mishap, is below.

In just six months with Pierce Bainbridge, Giuliani has seen five partners assigned to his Ukraine issues – of the five, three have quit, one – John Pierce – has been exposed and marginalized; his partners have stripped Pierce of his managing partner title and put him on leave for his financing and other activities.

As for Gabbard, Nick Grube reported in the Honolulu Civil Beat:  “According to Federal Election Commission documents, Gabbard’s campaign paid Pierce Bainbridge $50,000 for legal fees in July, shortly before the Google lawsuit was filed.”  The Google suit was thrown out shortly thereafter, $50,000 was down the drain.

Pierce Bainbridge has not only been hemorrhaging  attorneys it has been exposed as the “smoke and mirrors” production Lewis said it was over a year ago.

A sampling of low lights includes:

It seems very apparent that Pierce Bainbridge was never was what it painted itself out to be – the self-proclaimed “Next Generation of Litigation Excellence.”

The Future for Rudy, Tulsi and Pierce Bainbridge

For America’s Mayor, it’s unclear, what, if any, legal work Pierce Bainbridge has done for Giuliani.  But with the laundry list of horribles above, and the vote of no confidence from his long-time colleague Mukasey, it would be surprising to see Pierce Bainbridge do any meaningful legal work for New York City’s former Mayor.  Rudy would also presumably not be pleased that Pierce has attempted to exploit the tragedy of September 11th, 2001 to market Pierce Bainbridge.

For some strange reason certain people really glom onto me sometimes, I think [Rudy] really likes hanging out with me.

John Pierce after meeting with Rudy Giuliani in September 2018

There is a palpable air of insecurity in Pierce’s statement, (above) for an individual with such an apparent mindset,  seeing thirty-five of his attorneys quit, Marc Mukasey filing to withdraw as counsel, his own partners putting him out and stripping his of the managing partner title, must cut John Pierce deeply.

Be that as it may, the psychological toll of massive abandonment is likely not the primary issue keeping John Mark Pierce up at night; more likely it would be the slowly, yet steadily, increasing drum beat that both he, and potentially certain of his partners, may have engaged in criminal misconduct vis-à-vis both firm finances, and Don Lewis.

Rudy and Tulsi may be around for now, but with Pierce Bainbridge having been exposed to what appears to be unsavory truths, it remains to be seen if that continues. 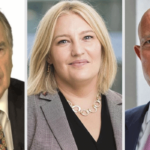