Tiffany Trump – the lesser known daughter of the President-Elect – may be following a Legally Blonde route to Harvard Law School.

Tiffany is not overly anxious to join the property empire of her father’s, but has previously expressed her interest in studying law.

An Instagram post a few months ago pictured her LSAT materials with a note: “I got this”. Plus, an article in Teen Vogue confirmed her interest in a law career, saying her studying for the LSAT was one of the main reasons she was unable to join the campaign trail with the rest of her family. 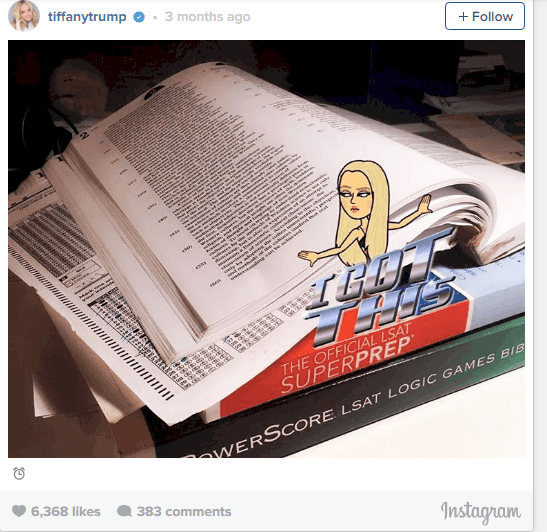 Above the Law reports that Tiffany finally took the LSAT last Saturday in the company of HLS escorts and Secret Service detail and it seems she may be pretty confident with her results. The legal blog also received a tip complete with cellphone pic that appears to show Tiffany touring Harvard Law School this week.

… for those who will scoff and act like this is just Harvard extending a courtesy to the rich and powerful regardless of merit — you know, the affirmative action white people don’t complain about — don’t write off Tiffany’s academic chops.

The 22-year-old daughter of Marla Maples followed a Trump tradition in attending Penn, but ditched finance and economics to major in sociology and urban studies, which instantly makes her more qualified to head up HUD than Ben Carson. Alas, the Bobby Kennedy law has robbed us of the most fashionable HUD Secretary since Jack Kemp and sent Tiffany back to the law school circuit.

So we have to wait and see if this Trump may be the one to follow her Aunt Maryanne Trump Barry’s success in the law . . or even public service, just like her father.