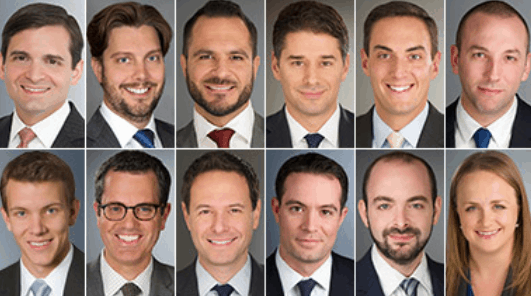 John Bowie. A recent raft of appointments by Big Law firm Paul Weiss, one of the most illustrious of the white-shoed New York law firms, was made there was a notable characteristic:  virtually no women appointees.

The Paul Weiss announcement carried a full list of the dozen appointments, but they were – to a man – white males apart from the singular lady, corporate lawyer Lindsey Wiersma (bottom, right).

At a time when law firms – particularly Big Law firms – are mostly trying hard to achieve gender equality, as well as countering sexual harassment and other issues, it is disappointing that a firm like Paul Weiss would be so blind to the current climate for changes in these areas.

The firm scheduled a town hall meeting to discuss the issue and its broader diversity efforts on January 14 with a view towards showing the ‘concrete initiatives’ they are in fact taking to deal with these issues.

The firm is in the Microsoft diversity program which is designed to provide bonuses to those firms that show a strong commitment to diversity but, as AbovetheLaw’s Joe Patrice pointed out, ” it’s also a sign that unconscious biases are everywhere and the first step to combatting them is not to be afraid to admit that they exist.”