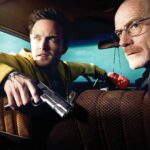 The combative, competitive world of television is tough, which is why bad guys in shows like “The Sopranos”, “Boardwalk Empire” and of course “Breaking Bad” are so popular – it’s their milieu.  But can the finale of a hit show have its scripts subject to trade secret law”.

Bloombergs asked a professor. The lengths that TV show producers will go to in order to protect the secrecy of final episodes are legendary. Take “Breaking Bad,” halfway through this final season, the actors started receiving redacted scripts; key scenes were blacked out. With “Lost,” most of the actors were only told how the show would end when they gathered to film the final scene.

And the script the “Sopranos” crew was given was missing the final scene altogether – some believed the series would end with Tony raking leaves. So what if the script for the Breaking Bad finale had been leaked?
Could it have been legally protected as a trade secret?

“Trade secret lawsuits are fairly common and the law is pretty simple.

The key really, in a lot of these cases, is showing that the information is economically valuable because of the secrecy and that secrecy measures have been taken that are normally adequate to retain the secrecy. I think in both of these instances, the Breaking Bad plaintiffs, if it comes to a case, would have a pretty good shot.