I usually don’t write a whole blog post just to disagree with a sitting federal judge, even when it’s about copyright law’s most notorious disagreement-generating machine: fair use.

This is an exception. A recent decision by the Eastern District of Virginia may cause some individuals and non-profits to believe that it’s permissible to copy and use “publicly available” photos from the internet, as long as they don’t know whether or not the photos are protected by copyright.

The purpose of this blog post is to dispel any such belief. Despite what you might have read in Brammer v. Violent Hues, LLC, you cannot just use photos you find on the internet, even if you are genuinely unaware of their copyright status. Why should you believe me and not a federal judge? Because, as I argue below, the other federal judges are on my side. 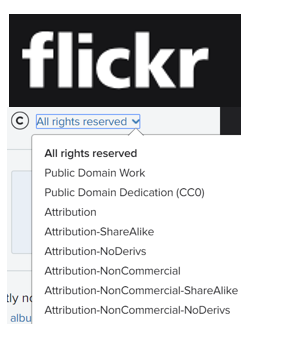 Back in 2011, Photographer Russell Brammer took a time-lapse night time image of the Adams Morgan neighborhood of Washington, D.C., and uploaded it to his Flickr account. Flickr allows photographers to choose from among about ten different copyright settings, including the reservation of all rights, dedication to the public domain, and various Creative Commons licenses. Brammer chose to reserve all rights so, when the photo was uploaded, it was accompanied by the copyright notice: “© All Rights Reserved.” 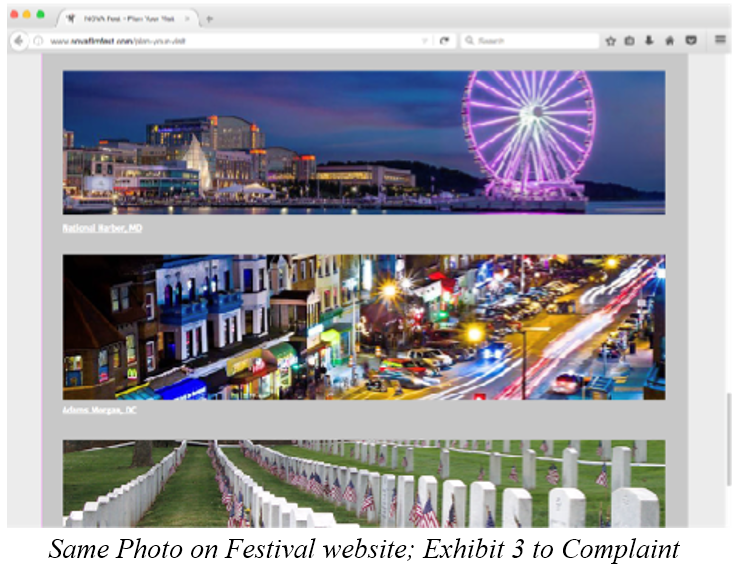 Violent Hues Productions runs the Northern Virginia Film Festival. In 2016, festival employee Fernando Mico found Brammer’s photo online and copied it for use on the festival website. Mico used a cropped version of Brammer’s photo to illustrate one of the “things to do” in the general area of the festival. Mico admitted that he found the photograph on Flickr through a Google search, but claimed “that he saw no indication that the photo was copyrighted and believed he was making use of a publically available photograph.” (By the way, “publically” is apparently a permissible albeit less common spelling of “publicly”).

Brammer sued in the Eastern District of Virginia. Violent Hues advanced a fair use defense and, on June 11, 2018, the judge granted summary judgment for the defendant.

The Court’s Fair Use Analysis

The Court held that every fair use factor codified at 17 U.S.C. § 107 favored fair use. As to the first factor, the purpose and character of the use, the Court held that the defendant’s use of the photo was transformative and also non-commercial (both of these conclusions have flaws, the discussion of which is beyond the scope of this post). The Court also held that:

Let’s talk about “good faith.” As an initial matter, one might question how the Judge could have found that there was no genuine issue of fact here for the jury. The plaintiff produced documentary evidence of a copyright notice (you can see it in the lower right hand corner of the Flickr exhibit). By contrast, the defendant’s evidence consisted of an affidavit from Mico claiming, not that the copyright notice wasn’t there, but only that he didn’t see it. Additionally, what relevance does the “publicly available” nature of a work indicate? There are many things that are “publicly available,” some of which are copyrighted and some of which are not. You can’t just use them all for your website. Did the Court mean to use the term “public domain”?

But the above discussion about the merits of the judge’s “good faith” determination is moot, because good faith is not relevant to the fair use analysis in the first place. Why did the judge think it was relevant? Let’s turn to the case law he cited on this issue. What’s that … he cited no case law? Ok, then let’s see what cases the defendant cited in its brief for this proposition. Wow, nothing there either.

Here is the law. In Harper & Row v. Nation Enterprises (which we wrote about in detail here), the Supreme Court indicated that a defendant’s “bad faith” could be taken into account in a fair use analysis. So, for example, if you break into someone’s office and steal a photo, and then publish it, the fact that you committed a crime to get the photo will be figured into the fair use analysis. This is because, as Justice O’Connor put it, “fair use presupposes good faith,” and evidence of bad faith rebuts that presupposition.

However, that does not mean that evidence of good faith can be affirmatively introduced to prove fair use. In the recent copyright case of Google v. Oracle(which we covered here), the Federal Circuit cited to Ninth Circuit law and to Professor Nimmer’s treatise (which in turn cited to lots of other cases) and stated:

[W]hile bad faith may weigh against fair use, a copyist’s good faith cannot weigh in favor of fair use [because] the innocent intent of the defendant constitutes no defense to liability.

To be clear, innocent intent is not completely irrelevant to copyright law. Among other things, it can impact the amount of statutory damages, it can determine whether a party is liable for contributory infringement, and it is important to certain aspects of the notice and takedown procedure under the Digital Millennium Copyright Act.

But when it comes to infringement, protestations of “good faith” and “innocent intent” are not admissible as affirmative evidence of non-infringement or fair use, or at least they are not supposed to be. If they were, every fair use analysis would devolve into a contest to see how well the defendant could make sad puppy dog eyes while insisting that no infringement was intended (and even if sad puppy dog eyes were relevant, surely they would be a jury question, not something to be evaluated on summary judgment).

Brammer is an Outlier even in the Fourth Circuit

So why did the judge take a different approach here? Maybe the law on this is different in the Fourth Circuit?

Actually, it’s not. For example, in Richard Anderson Photography v. Brown, where a college mistakenly believed that its permission to use certain photographs extended for a longer period than it actually did, the Western District of Virginia rejected the defense of “innocent infringement” as a matter of law. Similarly, multiple decisions of the District of South Carolina have held that:

The same holds true even in the Eastern District of Virginia, where a different judge in Phoenix Renovation v. Rodriguez wrote:

In other words, Brammer is an outlier even in the Fourth Circuit … even in its own district.

So if you are an individual or a non-profit, and you heard about this great new copyright case, here is the bottom line: Brammer is NOT a coupon for free photos for your website. I ran non-profit film festivals for nearly ten years before becoming a lawyer, so I sympathize with your plight. But unless you happen to be in the Eastern District of Virginia and happen to get assigned one particular judge, you will not be able to make sad puppy dog eyes and claim you didn’t see the copyright notice.  It will not work with other judges … it likely will not even work on this judge again if the plaintiff bothers to appeal.

Author’s Note: As noted above, there are many other aspects of this opinion with which I take issue, but they are beyond the scope of this blog post. Suffice to say, if you are relying on Brammer for anything, best of luck with that.