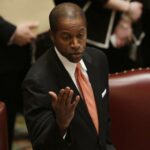 Preet Bharara, United States Attorney for the Southern District of New York, and George Venizelos, the Assistant Director-in-Charge of the New York Field Office of the Federal Bureau of Investigation (“FBI”), announced today the unsealing of a Complaint charging New York State Senator MALCOLM SMITH, New York City Council Member DANIEL HALLORAN, and four others with bribery, extortion, and fraud charges.  The charges against the defendants arise from an undercover investigation of three distinct but related bribery schemes involving public corruption. In the first scheme, SMITH allegedly arranged for cash bribes totaling $40,000 to be paid to VINCENT TABONE and JOSEPH SAVINO, two New York City Republican county leaders, as part of an effort by SMITH, who is a Democrat, to appear on the Republican primary ballot as a mayoral candidate in the 2013 election.

HALLORAN is alleged to have received approximately $20,500 in cash bribes to act as an intermediary with TABONE and SAVINO on SMITH’s behalf.  In the second scheme, HALLORAN allegedly received approximately $18,300 in cash bribes and $6,500 in straw donor campaign contribution checks in exchange for agreeing to steer up to $80,000 of New York City Council discretionary funding to a company he believed was controlled by those who paid him the bribes.  The final scheme involved NORAMIE JASMIN and JOSEPH DESMARET, the Mayor and Deputy Mayor of the Village of Spring Valley in Rockland County, and their alleged receipt of financial benefits, including JASMIN’s receipt of a hidden interest in a real estate project and DESMARET’s receipt of approximately $10,500 in cash bribes, in exchange for official acts.  All six defendants were arrested this morning and will be presented later today in White Plains federal court before U.S. Magistrate Judge Lisa Margaret Smith.
Share the news
TwitterFacebookLinkedInPinterestRedditEmail