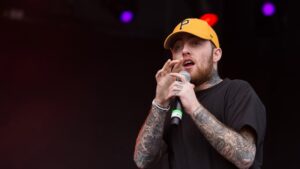 The initial appearance for Cameron Pettit, the alleged drug dealer charged with providing fentanyl to rapper Mac Miller, just concluded. Pettit was ordered detained – meaning he will be held without bond pending trial. Pettit waived his right to a preliminary hearing. An arraignment in this matter was scheduled for October 11 at 11:00 a.m. in Roybal 341.

Powered by LawFuel – LOS ANGELES – A Hollywood Hills resident was arrested this morning on federal charges alleging that he sold counterfeit pharmaceutical narcotics containing fentanyl to Mac Miller two days before the hip-hop artist died of a drug overdose.

Cameron James Pettit, 28, was arrested this morning by special agents with the Drug Enforcement Administration and officers with the Los Angeles Police Department. Pettit is expected to make his initial appearance this afternoon in United States District Court in downtown Los Angeles.

Pettit was arrested pursuant to a criminal complaint filed last Friday that charges him with one count of distribution of a controlled substance.

According to the affidavit in support of the criminal complaint, Pettit and others distributed narcotics to 26-year-old Malcolm James McCormick – who recorded and performed under the name Mac Miller – approximately two days before McCormick suffered a fatal drug overdose in Studio City on September 7, 2018. The Los Angeles County Medical Examiner-Coroner later determined that McCormick died of mixed drug toxicity involving fentanyl, cocaine and alcohol.

According to communications detailed in the affidavit, late on the night of September 4, Pettit agreed to supply McCormick with 30 milligram oxycodone pills, as well as cocaine and the sedative Xanax. But, instead of providing McCormick with genuine oxycodone when he made the delivery during the early morning hours of September 5, Pettit allegedly sold McCormick counterfeit oxycodone pills that contained fentanyl – a powerful synthetic opioid that is 50 times more potent than heroin.

Two days after Pettit allegedly supplied McCormick with the fentanyl-laced pills, McCormick died in his Studio City home. The affidavit states that that hours after news outlets reported McCormick’s death, Pettit sent a message to a friend saying, “Most likely I will die in jail.”

Investigators believe that McCormick died after snorting the counterfeit oxycodone pills containing fentanyl and that those pills had been provided by Pettit, according to the affidavit. While another individual allegedly supplied McCormick with other drugs prior to his death, according to the affidavit those narcotics drugs did not contain fentanyl.

“Fentanyl disguised as a genuine pharmaceutical is a killer – which is being proven every day in America,” said United States Attorney Nick Hanna. “Drugs laced with cheap and potent fentanyl are increasingly common, and we owe it to the victims and their families to aggressively target the drug dealers that cause these overdose deaths.”

“While the death of any victim of the opioid epidemic is tragic, today’s arrest is another success for the DEA’s HIDTA Fusion Task Force,” said DEA Los Angeles Deputy Special Agent in Charge Daniel C. Comeaux. “Let our message be clear, if you peddle illegal drugs and kill someone, the DEA will be the voice of the victim. We will not rest until you face the justice system.”

If convicted of the drug trafficking charge alleged in the complaint, Pettit would face a statutory maximum sentence of 20 years in federal prison.

A criminal complaint contains allegations that a defendant has committed a crime. Every defendant is presumed innocent until and unless proven guilty beyond a reasonable doubt.

The ongoing investigation in this matter is being conducted by the High Intensity Drug Trafficking Area’s (HIDTA) Opioid Response Team, which operates under the direction of the DEA. The Los Angeles Police Department provided substantial assistance in this matter.

This case is being prosecuted by Assistant United States Attorney Matthew J. Jacobs of the General Crimes Section.