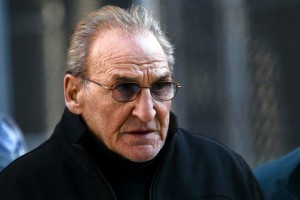 Old-style mob boss Vincent “Vinnie” Asaro was so classic his role was epitomized in the movie “Goodfellas”.  But his true-life role appears to have ended after decades of mob activity as part of the Bonanno crime family with the 78 year old’s arrest.

Asaro was involved in murders and general mob mayhem, including being involved inthe 1978 Lufthansa robbery.

But his “Goodfellas” role include plotting crime along with such gangsteras as Jimmy “The Gent” Burke and Henry Hill, who were portrayed in “Goodfellas” by Robert De Niro and Ray Liotta.

Several of the alleged Bonanno crime family captain’s relatives were known to authorities as members of organized crime, law-enforcement officials said, as reported in the Wall Street Journal.

And Mr. Asaro’s 55-year-old son, Jerome “Jerry” Asaro, was indicted with him as part of Thursday’s racketeering case, though he hasn’t been charged in the Lufthansa robbery. Both pleaded not guilty and his lawyer declined to commen

“I really don’t think there should be guilt by association,” said Mr. Asaro’s lawyer, Gerald McMahon, adding that the “sins” of his relatives should not be cast upon his client. Mr. McMahon said he plans to prevail at trial and watch his client walk out of court “a free man.”

But federal prosecutors charged Mr. Asaro with a career’s worth of racketeering charges, including murder, extortion, arson and armed robbery. Court documents chronicle the ups and downs of a man who prosecutors said was dedicated “to a life of crime.”

Mr. Asaro was inducted into the Bonanno crime family as an official “made” member decades ago—and for a time was in a crew headed by a relative, according to court documents.

One of his earliest acts, prosecutors charged, was strangling Paul Katz to death with a dog chain in December 1969. Mr. Asaro believed Mr. Katz was cooperating with authorities, prosecutors said. The body was buried in concrete beneath a Queens house.

Mr. Asaro was childhood friends with James “Jimmy the Gent” Burke—they grew up together in Ozone Park, Queens. Though Mr. Burke was allegedly an associate in the Lucchese crime family and prosecutors said Mr. Asaro is a Bonanno, they remained close—Mr. Asaro named Mr. Burke as his son’s godfather, law-enforcement officials said, and they traveled in the same circles.

Mr. Burke, now dead, was the suspected mastermind of the Lufthansa heist, which at the time was the highest-value robbery in U.S. history and was subsequently central to the plot of the popular film “Goodfellas.”

In December 1978, masked men held Lufthansa terminal workers at gunpoint while taking about $5 million in cash and about $1 million worth of jewelry from a vault. Mr. Burke was never charged in the robbery.

But Mr. Asaro’s alleged role in the crime remains unclear.

Joe Coffey, who at the time was commanding officer of the NYPD’s Organized Crime and Homicide Task Force and investigated the Lufthansa case, said Mr. Asaro had a hands-on role.

Prosecutors say Vincent Asaro became a member of the Bonanno crime family more than 30 years ago. Prosecutors alleged these key points in his career:

He was definitely a lookout,” said Mr. Coffey, who remembers regularly tailing Mr. Asaro in those days. “They brought him along so Burke could give him a piece of the pie. He was a minor player at best.”