Newspaper reports indicate that NBC has Mrs Clooney in their sights as Trump’s replacement, given ‘The Donald’s’ new role as GOP contender for the US president.  One presumes that even someone of Donald Trump’s endless self-belief could not contemplate being president of the United States and “Apprentice” front person as well.

Although, who knows?  However Trump is “fired” anyway from the show, following his anti-Mexican tirade, which infuriated many, including NBC. 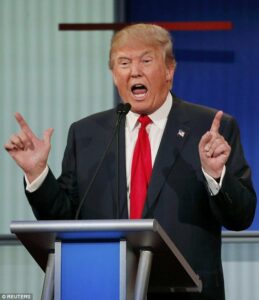 Well NBC do, evidently and they are looking for a top female candidate to replace Mr Trump, with names mentioned including Facebook CEO Sheryl Sandberg and Fantastic Four actress Jessica Alba.

One NBC executive was quoted said yesterday on the Amal ‘nomination’ saying: “As well as the cachet of being married to George, she is also a highly respected figure in her field and, since she rarely says anything in public, there is still something of an air of mystery to her.

“Basically we want Amal, although there are a couple of other prominent women in contention.

“We think she could be a perfect fit, if her schedule can be made to dovetail with shooting requirements.”

The Daily Mirror reports that the idea of filming mainly in New York, where she is a regular lecturer as a visiting professor at Columbia Law School, appeals to the new Mrs Clooney, according to friends of the couple.

These include nightclub tycoon Rande Gerber and his wife, former supermodel Cindy Crawford, who has hosted and guest starred on several American TV shows and is reportedly encouraging Amal to “go for it”.

Celebrity Apprentice, which now averages more than seven million viewers but has registered as many as 11 million, features famous guests who, instead of competing for a job, battle to see who can raise most money for charity.

Previous winners have included Britain’s Piers Morgan and late comedienne Joan Rivers. LA-based media analyst Mike Raia said: “The show would be a perfect vehicle to launch Amal into an upscale on-screen career that could completely elevate her profile in the United States.”

After spending much of this summer at Clooney’s luxury villa on Lake Como, Italy, the couple now plan to sell the property for £32.2million, which is more than five times the amount he paid for it in 2001.

The Ocean’s Eleven movie heartthrob, 54, is also selling his holiday villa in the Mexican resort of Los Cabos, which would leave him and his wife with homes in LA, New York and England, where renovations to their Grade II listed mansion in Berkshire are almost completed.