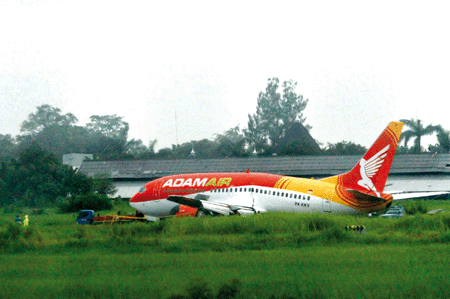 As the wreckage of Adam Air Flight 574 has not yet been recovered, it is much too early to state any definite conclusions as to the cause of this crash. However, it is possible to identify several areas of probable investigation. A representative of Adam Air has stated that the crash probably was caused by the weather. However, large commercial jets, such as this Boeing 737, should be able to maintain flight even in bad weather conditions and weather alone should not have caused this crash.

The Boeing 737 has experienced alleged engine flame-outs in bad weather, however, caused by the ingestion of water into the General Electric engines on the aircraft. The design of these engines has been criticized as not adequately deflecting rain and other precipitation away from the engines. This design failure allegedly caused the crash landing of Garuda Flight 421 into the Solo River in Indonesia on January 16, 2002.

There also have been reported problems with flight control and uncommanded rudder movements in the Boeing 737. A U.S. jury found that the crash of Silk Air Flight 185 near Palembang, Indonesia on December 19, 1997 was caused by a defective servo valve in that 737 aircraft’s rudder which caused the rudder to “jam” and sent the aircraft into an uncontrolled spin, resulting in the deaths of all those onboard. The Silk Air crash followed the crash of United 585 on March 3, 1991 at Colorado Springs, Colorado, and the crash of US Air 427 on September 8, 1994 near Aliquippa, Pennsylvania in the U.S., both of which reportedly caused by defective servo valves.

Since Adam Air 574 apparently went out of control while flying at altitude, the crash investigators certainly will investigate the possibility of an uncommanded rudder movement in this 737 aircraft.

Lastly, the age of the Adam Air aircraft (17 years) and reports that it may have sustained a catastrophic structural failure in flight, perhaps due to metal fatigue, raise questions about the aircraft’s airworthiness and maintenance. Adam Air, as the company maintaining the aircraft, obviously would bear responsibility. However, in such event, it would not be the only responsible party.

Reportedly, the aircraft was leased to Adam Air by its owner, a U.S. leasing company, GE Commercial Aviation Services. Such arrangements are fairly common, particularly with newer airlines, such as Adam Air, and often involve the lease of older aircraft which have been retired from active service in other countries. A contention may be made that GE owed a duty to the flying public to provide this start-up airline with airworthy aircraft and to ensure that the airline had a proper maintenance program and employed qualified, trained aircraft mechanics.

Victims of the crash of Lion Air JT 538 on November 30, 2004 at Solo, Indonesia have filed such a negligence lawsuit in the U.S. against GE Commercial Aviation Services, which also is the owner and lessor of the Lion Air aircraft.

Other issues undoubtedly will become important as more facts are discovered. A thorough investigation is needed to discover all the causes of this disaster and to institute changes to prevent future occurrences.

The families of victims of the recent Adam Air crash should anticipate that representatives of Adam Air and its insurers will soon approach them with offers of money to settle their claims against the airlines. The danger presented to the families at this time when they are grieving, when they may be in financial need, and when they are least able to carefully consider any such proposal and obtain the benefit of legal advice is that the airline and its insurers will present the families with an extremely unfair settlement agreement, or release, for the families to sign in exchange for the payment.

The airline and its insurers likely will present the Adam Air victims’ families with a release which, unknown to, or not understood by, the families, will not only release Adam Air from any further liability to the families, but also will release other potentially responsible parties, specifically including the U.S. airplane manufacturer, The Boeing Co.

If the Adam Air crash was caused, even in part, by a defect in the aircraft, the families may have a valid cause of action against the aircraft manufacturer which they may be able to pursue through an action in the U.S. Typically, the amount the airline and its insurers offer in settlement will be only a small fraction of what the families may be able to recover in such an action against other parties in the U.S. The Adam Air victims’ families must be very careful that they do not unknowingly give away their important and valuable cause of action against other parties for a small settlement payment from the airline and its insurers.

The families of the victims of Adam Air 574 are grieving over the loss of their loved ones in this terrible tragedy. Their grief has been compounded by the initial erroneous reports of location of the wreckage and discovery of survivors. The families must be allowed time to grieve before confronting the reality of moving forward with their lives.

As in the case of other recent air crashes in Indonesia, particularly the Mandela Air crash at Medan in September 2005, victims’ families soon may be beset with attorneys and their representatives seeking to represent the families. The families are encouraged to take time and exercise caution in choosing any legal representative.

A United States federal statute prohibits an attorney and his representative from making an unsolicited communication to a relative of a victim of an air crash for 45 days after the occurrence. U.S. attorneys also generally are prohibited by their ethical rules of conduct from soliciting clients. Unfortunately, some attorneys nevertheless engage in such improper, inappropriate and insensitive conduct.

The area of aviation law is very complicated and specialized. The choice of an ethical, well-qualified and experienced attorney will be critical to the success of the families’ claim for fair and reasonable compensation for the loss of their loved ones. The Adam Air families should not be rushed, pushed or tricked. They should take the necessary time and then use care in making this decision.