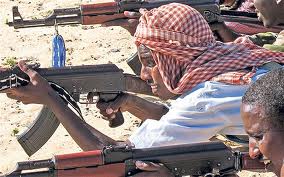 LOS ANGELES – An Orange County man who admitted that he intended to assist al-Qai’da by traveling to Pakistan, where he would provide weapons training to members of the terrorist group, was sentenced this morning to 13 years in federal prison.

Nguyen pleaded guilty late last year to one count of attempting to provide material support to a designated foreign terrorist organization. Nguyen, who also used the name Hasan Abu Omar Ghannoum, admitted that in late 2012 he travelled to Syria where he joined opposition forces. Using a social network site during a four-month period he was in Syria, Nguyen told people that he was fighting against the Assad regime and that he had had a “confirmed kill.” After he returned to the United States, Nguyen told associates that he had offered to train al-Qai’da forces in Syria, but his offer had been turned down.

Between August 3 and October 11, 2013 Nguyen met with a man he thought was an al-Qai’da recruiter, but who in fact was working with the FBI. Within the first few minutes of their first meetings, Nguyen began questioning the man to determine if he was a fellow jihadist, according to a plea agreement filed in federal court. Nguyen told the man about his exploits in Syria and said he wanted to return to jihad because “this was what he was born to do.” During their meetings, Nguyen and the man he thought was an al-Qai’da recruiter discussed how Nguyen could travel to Pakistan under a fraudulently obtained United States passport. After Nguyen gave the purported recruiter a photo of himself and a passport application with bogus information, Nguyen agreed to travel to Pakistan, where he would train 30 al-Qai’da fighters for 5 or 6 weeks to prepare them “for a guerilla warfare ambush attack on coalition forces” that would take place in late 2013, according to the plea agreement.

With the intention to travel to Pakistan to train al-Qai’da forces for the ambush, Nguyen on October 1 purchased a plane ticket to travel from Mexico to Peshawar, Pakistan. On October 11, 2013, Nguyen went to a bus station in Santa Ana where he purchased a ticket to Mexico and was arrested by FBI agents. When he was taken into custody, Nguyen had in his possession the false passport and a computer hard drive that contained “over 180 training videos on shooting firearms.”

Nguyen has been in federal custody since his arrest.

The case against Nguyen is the product of an investigation by the Federal Bureau of Investigation and the Joint Terrorism Task Force.