You are here: Home / Lawyers / ‘Follow the Money, Mr Bond’ – The Money Trail From The Bond Villain Case of Sergey Grishin & ‘The Firm’, Pierce Bainbridge

LA Correspondent – Perhaps the most bizarre client of the imploding Pierce Bainbridge law firm, which has lost at least 50 lawyers in the last few months, is the “Scarface” Russian Oligarch Sergey Grishin.  Grishin might well appear from a reading of the litigation he is involved in currently as something of a real-life version of a James Bond villain. As LawFuel reported before, he bought the Scarface mansion in Santa Barbara, and appears to have a love of weapons just like the original “Cara Cicatrice” and the allegations against him are as horrifying as anything film-fiction could deliver against James Bond. 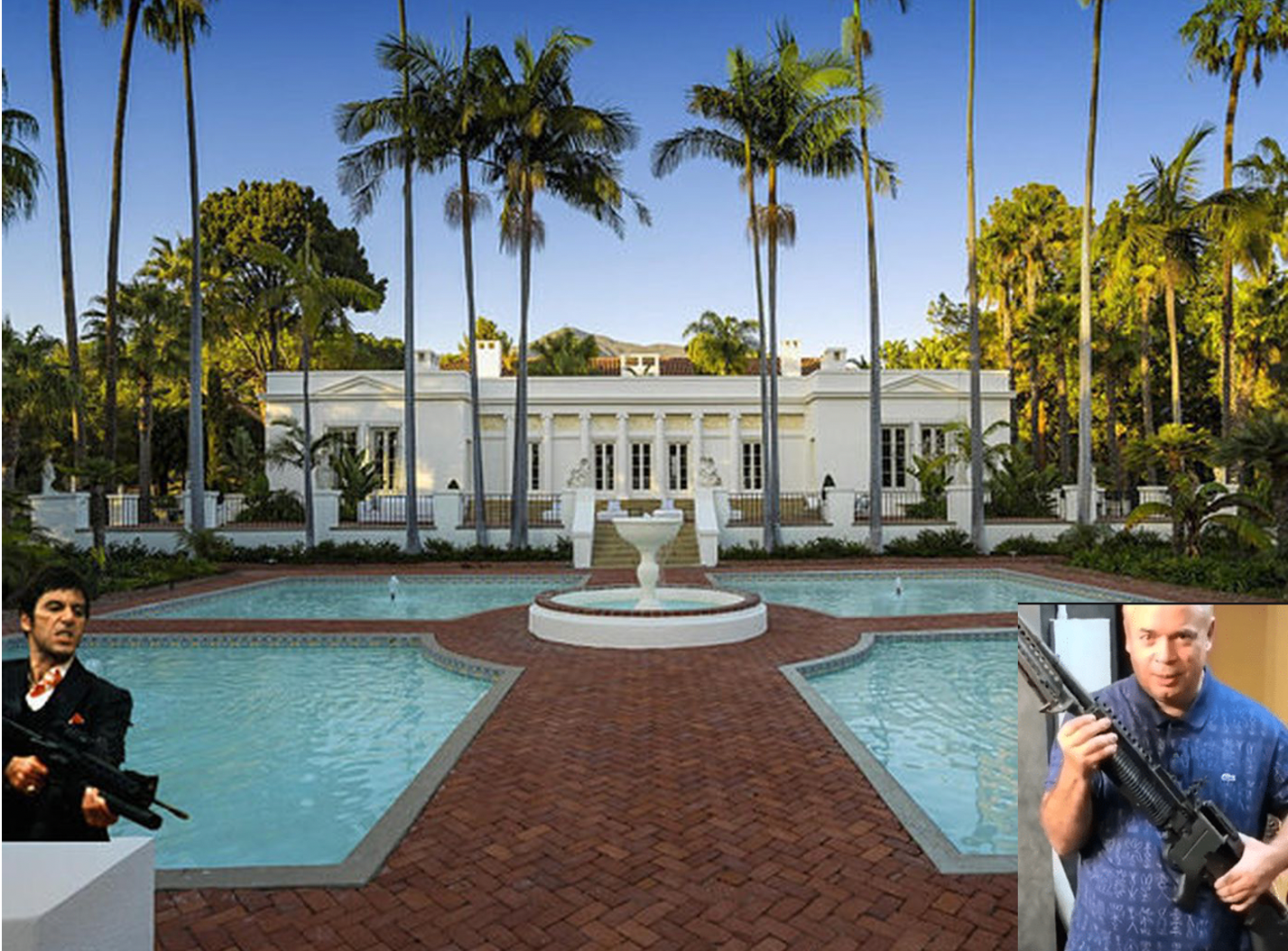 According to explosive allegations in two lawsuits filed in Los Angeles, Grishin confessed to orchestrating a $60 billion heist from the Russian Central Bank, made numerous death threats against his ex-wife and had her falsely imprisoned in a Russian jail, tried to kill her and when that failed tried to hire a hitman, and distributing videos of himself having sex with prostitutes.   He also purchased the “Scarface” mansion, a private jet, and a luxury penthouse apartment.

The multiple allegations are supported by an disturbing record of text messages, emails, videos, and audio recordings.  Grishin has asserted the Fifth Amendment and has kept a low profile, with no social media or other current information on him.  He may be in a tropical Bond Villain lair in Fiji, where he allegedly claimed he would be according to the following text:

The two women have been battling Grishin for almost two years now.  Despite his billions, he’s lost each court battle with them so far, and his prospects in future look dubious given that he has asserted the Fifth Amendment and won’t be testifying.

Amman Khan, the former Managing Partner of the Pierce Bainbridge Los Angeles Office, who has handled most of the litigation for Grishin, was dubbed a “rainmaker” by his former colleagues at Pierce Bainbridge.  How much of Grishin’s money flowed to Pierce Bainbridge?  To follow the money, we need to start at the beginning of the Bond Villain’s story.

“All the greatest men are maniacs”

Grishin emerged from the rubble of the Soviet Union with a lot of rubles.  He was the owner of a bank and lots of other assets, but his origins are a bit mysterious.

How did he get his start?  He came out of nowhere and then suddenly emerged as this uber wealthy Oligarch.  Russian television did a profile on Grishin where he explains on video that he figured out how to steal $60 billion from the Russian Central Bank.  It would appear that even the KGB can’t understand how he did it.   The Russian expose is conveniently subtitled in English so it’s easy to follow. It’s a fascinating confessional.

Grishin is in a league of his own if the the theft of as much as $60 billion is correct.   The Offshore Leaks Database show Grishin’s offshore holdings as of 2010.  Since then he’s reportedly invested in Silicon Valley, including Facebook.

Despite his billions, Grishin decided to go to war with his ex-wife and her business partner Sulkess over chump change. The two women allege in their pleadings in the court cases that Grishin’s marriage to Fedoseeva was crumbling and that he wanted to destroy them financially. They also allege that he has a pattern and practice of doing this with other women. They also claim that he wanted to destroy their reputations by weaponizing  social media and allege that he started a social media company for that purpose, bragging that he would soon have many millions of followers, and used the threat of a smear campaign to try to extort them into capitulating to his lawsuit.

“Do you expect me to talk?”

Among the allegations against Grishin are the sinister threats that he will wait for years against the two women to implement his death threats against them.

“I know how to wait when it is necessary”

“Cruel, merciless smart devils who can wait for many years”

“All your life you will now be living in fear of the unknown and my unpredictability. He will destroy you, that fear.”

“I will burn everyone you loved… The list is already ready… Anna, I CURSE you! I believe that you will burn in hell, already in life and then forever! You deserve it to the fullest extent. Your journey has begun… You, girl, fucked up and mocked Woland. Don’t be surprised by anything now… And your dear mother Marina Fedoseeva.. Woland is already close by. He’s coming…. I WILL NOT FORGET… #uglybitch #hate #kill”

“I will simply punish you by cutting you up piece by piece, from the tail.  Until I reach your head. THAT’S WHAT’LL HAPPEN”

“I have fun with you like a cat with a mouse… You don’t know yet what is such real pressure and real suffering… I will teach you how to understand it… The road to hell can also be fun… keep in mind, it’s just a laugh…the nightmare will start later.”

“I warned you, we do not tolerate failure, Number 3. You know the penalty.”

Grishin’s lawsuits appear to have backfired spectacularly.  He could easily have afforded to pay $5 million to settle his divorce and the claims by the two women against him, but he is now facing a $100 million lawsuit for his alleged threats to wait for years to kill the two women, and has asserted the Fifth Amendment.

The role of Pierce Bainbridge in this legal adventure is yet to be unraveled, but the dramatic legal losses for their client occurred after they undertook his representation, with a corresponding public exposure to the array of horrendous threats and behaviors that are outlined in the litigation.

Grishin then copyrighted the death treat videos that Sulkess posted on Facebook and prepared a lawsuit on Grishin’s behalf where he sued Sulkess for $50 million in federal court for defamation and copyright infringement.  Khan lost that case on an anti-SLAPP motion. Grishin was ordered to post an $85,000 bond if he wants to file an appeal.

Sulkess alleges that Khan himself intentionally violated a restraining order which provided that Grishin could not “harass, intimidate, stalk, or disturb the peace of the person” or “take any actions, directly or indirectly, to obtain the addresses or locations” of both Sulkess and Fedoseeva. According to court filings, Fedoseeva and Sulkess were stalked and secretly had their photographs taken while the restraining order was in effect.

Khan also added Fedoseeva and Sulkess as individual defendants to the action which was originally only against their production company.   As a result of being named individually, they were able to file a cross-complaint against Grishin without having to try to find and serve the jet-setting billionaire who regularly travels around the globe in his Bombardier private jet.  Grishin has now asserted the Fifth Amendment in connection with the claims that he made death threats, tried to kill Fedoseeva, tried to hire a hitman to kill both women, sent them videos of himself having sex, and other behavior.

Grishin is now on his fourth law firm. The first firm, Glaser Weil, withdrew as his counsel. The second firm, a former Glaser Weil attorney, was replaced by Pierce Bainbridge.   Now that Pierce Bainbridge appears to be out of the picture Grishin is with the Khan Law Office, a solo practice whose motto is “We’ve Got Your Back,” stating that it represents “clients with an exceptional level of dedication, determination and skill.”  There is no mention on the Khan Law Office website that Khan was even with the Pierce Bainbridge firm or any of the results in the Grishin cases.

Why would Grishin proceed down the litigation path when he has so much to lose? According to court records, Grishin wants U.S. citizenship, and wrote Donald Trump to request citizenship.   John Pierce, the founder of Pierce Bainbridge, an outspoken Trump supporter, and claims to be a close friend of Rudy Giuliani, the President’s consigliere.  Last year Giuliani pocket-dialed an NBC reporter and in his conversation was heard to say that he needed to get some “money.”

The ‘Follow the Money’ mantra has frequently been a refrain that echoed about the Pierce Bainbridge corridors with clients like Sergey Grishin and the other notorious clients in the failing firm’s rolodex. Just where it leads them is a continuing topic of interest.