You are here: Home / News / What Sort of Google Deal Was Done For Kit Kat? 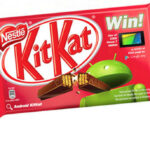 What sort of deal did Apple do with Hershey to secure the “Kit Kat” name?  Nobody is saying and certainly the lawyers aren’t talking.
[wp_ad_camp_3]
The company was not disclosing what the deal was with the new operating system to be launched on September 10. The name was chosen because Kit Kat’s name, audience and jingle resonate with the hip, young people who are evidently a perfect fit for Kit Kat consumers, too.

The Kit Kat name was unexpected since tech pundits have speculated for months that the next operating system would be called Key Lime Pie.

Marc Vanlerberghe, director of Android Marketing, said the name was chosen because Kit Kat bars have been a “favorite go-to snack among the team since the early days of Android.”

Analyst Charles Golvin of Forrester Research tells CNET that pairing the lovable Android mascot with an iconic candy bar will get buyers saying, “I not only love Android, but I want the latest and greatest.” Stirring up excitement is usually a good thing, but it could also lead to frustration, because it points out problems with Android fragmentation when not everyone will be able to get Android 4.4 right away.

However, Golvin sees the co-branding as a “clever move” that makes Android even more of a household name than it was before, by teaming up with the popular candy brand.

CNET report that until today, many of the Android staff were operating under the assumption that Key Lime Pie would be the name for the 4.4 build. In fact, Google’s partners have been told that the next version of Android was going to be named for the dessert.

Looking back at the previous names of Android releases, it’s quite fun to imagine the other possibilities that might have emerged. Hostess (1.5 Cupcake), Dunkin Donuts (1.6 Donut), and Post Holdings (Honeycomb 3.0) all come to mind as brands that could have done something similar.

What do you think of the Android and KitKat partnership — is it a good idea, or has Google made a mistake in commercializing Android?

With Android KitKat, Google says its goal is “to make an amazing Android experience available for everybody.” While that is certainly more than a tad bit vague, the statement does dovetail with rumors that Google is looking to move beyond the smartphone and tablet market into smartwatches and gaming consoles.