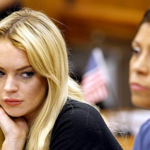 Holley appeared in court on Monday for her to formally take over the case from Heller. Lohan is in further trouble after she violated her probation and faced further arrest and further jailing if she did not go to rehab. She checked into the Betty Ford clinic THursday.

Heller told the judge the facility met all the conditions of Lohan’s plea agreement.

Lohan’s Porsche rear-ended a truck on Pacific Coast Highway on June 8, but she denied she was driving. She entered a no-contest plea in March and agreed to enter rehab, spend 18 months in psychotherapy and serve 30 days of community service.

Lohan spent several months in 2010 at Betty Ford, where an employee accused her of assault. Prosecutors declined to charge Lohan.