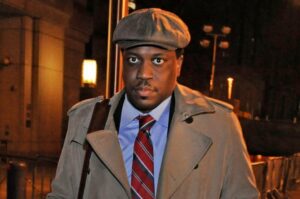 The Federal court jury took three days’ deliberation but found the lawyer not guilty on charges of conspiracy to commit wire fraud and aggravated identity theft.

Newkirk, 39, was convicted of helping convicted felon Calvin Darden Jr secure financing for the failed $31 million deal to buy the magazine, with the prosecution alleging that Darden had impersonated his father, a former successful executive.

“I am very disappointed by the verdict,” Newkirk said immediately after the verdict was read aloud in the courtroom.

His lawyer Priya Chaudhry, said an appeal is planned.  Newkirk faces up to 20 years in prison when sentenced early next year.

While Darden’s father was involved in the deal, prosecutors said he swore that he had no financial involvement in it and was instead trying to help his son following a prior run-in with the law.

In that case, the younger Darden served about 4-1/2 years in prison after pleading guilty in 2005 to New York state charges that in a prior career as a stockbroker, he stole almost $6 million from three Wall Street firms and eight investors.