Oscar Pistorius has been doing it hard in the witness box.  Hammered by aggressive prosecution and recoiling in horror at grisly pictures of his dead girlfriend, the athlete has broken down and changed his story. 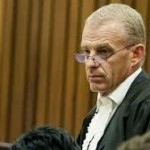 “You shot and killed her. Won’t you take responsibility for that?” he asked?

“I did, my lady,” Pistorius tearfully replied.

Pistorius claimed that he had not intended to kill anyone when he fired four gunshots into a toilet door at his home.  He told the court he was acting out of fear when he fired the shots.

The fierce prosecution by Gerrie Nel, more than a match for the famed abilities of his defence colleague Barry Roux, took even hardened observers by surprise.  He showed no relenting and took no prisoners.

The Guardian reports that he took the defence team by surprise when hesurprise he showed a video, first broadcast on Sky News, of Pistorius firing a gun at a watermelon and saying off-camera: “It’s a lot softer than brains. But … it’s like a zombie stopper.”

Nel put it to the once celebrated sportsman: “You know that the same happened to Reeva’s head. It exploded. Have a look. I’m going to show you, Mr Pistorius, it had the exact same effect, the bullet that went into her head.”

There was gasps and murmurs in the courtroom as, suddenly without warning, multiple TV screens showed a graphic police photo of Steenkamp’s head, turned to the left with her eyes closed. There was a gruesome mass of tissue on the back and upper parts and her blonde hair was drenched dark with blood.

Pistorius, cringing and shielding his eyes from a screen on the witness stand, said through sobs: “I remember. I will not look at a picture where I’m tormented by what I saw and felt that night. As I picked Reeva up, my fingers touched her head. I remember. I don’t have to look at a picture, I was there.”

As so often in the trial, Pistorius then descended into near hysterical crying, his hands over his face as he rocked from side to side, forcing an adjournment. His family, sitting in the public gallery, were visibly appalled by Nel’s combative style and shook their heads in disgust. Defence counsel Barry Roux described the incident as “uncalled for”.