Last Year: 23October 29, 2018 by LawFuel Editors (Edit)Hardly a great year for the ANZ, New Zealand's largest bank, having to endure the revocation of the bank's NZ accreditation by the Reserve Bank and increasing the minimum regulatory capital requirement by more than $1 billion.Then there was the various dubious dealings by former CEO … END_OF_DOCUMENT_TOKEN_TO_BE_REPLACED 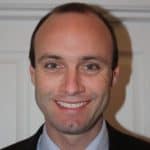 New Entrant - David Bricklebank It may be no accident that 'bank' is in New Entrant David Bricklebank's name.  As General Counsel and Company Secretary of ANZ Bank NZ, the country's largest bank, his role carries an influence that belies the title.Having just released its record profit of almost NZD2 billion and paying more tax than any company in the country, the … END_OF_DOCUMENT_TOKEN_TO_BE_REPLACED