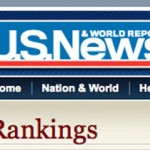 Yale Law School takes the top position in the latest US News and World report rankings, a list that has stirred controversy and debate in recent times.

The US News rankings displayed relatively few changes in the top 10 positions, although it was lower down the law school rankings where major changes occurred.

In the category ranging from 50 to 144 there were 18 law schools that showed rankings changing by at least 20 positions, which compares to last year’s result showing only four such changes.

In the top 10, Harvard moved from Number 3 to position 2, which it tied with Stanford Law School.

Law.com reports on the rankings:
Fully 39 schools moved up or down the list by 10 spots or more, although only one of those moves occurred among the top 50 schools. (The University of Illinois College of Law nearly fell out of the top 50 after declining by 12 spots to land at No. 47, after losing 12 spots the previous year following an admissions scandal.)Bob Morse, director of data research at U.S. News, attributed much of the churn to a revised methodology involving the weight given to schools’ success at landing their graduates in jobs.

That portion accounts for 20 percent of a school’s overall score.In the past, U.S. News counted graduates in any type of job equally. This year, the magazine gave greater weight to graduates in permanent, full-time jobs that require bar passage or in which a J.D. is an advantage. It assigned a lower weight to graduates in part-time or short-term jobs, or jobs for which a law degree is not a requirement or preferred. The change was possible because the American Bar Association last year began requiring law schools to report far more detailed graduate employment information.

“It was an important change and an important adjustment, because we think [full-time lawyer jobs] are the type of jobs prospective law students have a goal of obtaining,” Morse said.

The new methodology better indicates which law schools send the most graduates into the jobs prospective student most often aspire to, he said.Morse declined to detail how the magazine weighed the different types of jobs, saying that information might allow law schools to “game the rankings.

“The new placement formula did not appear to have affected the top schools much, given that they send a high percentage of their graduates into full-time lawyer jobs, Morse said. Outside the top 50, it was a different story. Schools in the Midwest and Southeast tended to see the largest gains, while the biggest drops almost universally hit schools in the East and on the West Coast.