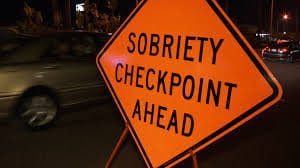 The Conflict of Sobriety Checkpoints

Over the years there have been conflicting opinions about DUI/DWI checkpoints with both sides providing very solid reasoning for their stance. Sobriety checkpoints have been a hot-button topic over the years, and with the holidays upon us, they are in full view. Many feel the checkpoints or roadblocks are unconstitutional, and some state legislatures feel that way too.

Each of these states either asserts that DUI checkpoints are unconstitutional, illegal, or there is no state authority to do so, while the remaining 38 states allow for some form of a sobriety checkpoint.

Additionally, the checkpoints mostly don’t arrest people for DUI. The majority of arrests at these stops tend to be for driving without a license, being in the country illegally (especially in California), and having outstanding warrants.

Members from MADD assert that visibility checkpoints are mostly there to serve as a deterrent to drunk drivers. They feel the general public will drink less before getting behind the wheel or not drink at all.

Then there is the debate about the cost-effectiveness of DUI/DWI checkpoints.

The cost-effectiveness of sobriety checkpoints along with where states allocate the funds received for this purpose from the federal government is another issue up for debate.

The pinnacle costs are used to pay for each police officer’s time and the enforcement agencies publicity. Each officer involved in the checkpoint works for several hours during the operation and many of them are being paid overtime.

According to the National Highway Traffic Safety Administration (NHTSA), costs can be cut down if they reduce the number of police officers on sobriety detail from 10-12 to about 3-5. The NHTSA also states that in two West Virginia counties DUI arrests were 70 percent lower when they used a weekly program with “lower staffed” sobriety checkpoints than the typical “higher staffed” program.

Some argue that these checkpoints are used solely for the purpose of boosting state revenue and if they so just so happen to arrest someone for DUI in the meantime, well that’s icing on the cake.

California Watch along with UC Berkeley estimated in 2009 that $40 million was collected in police fines and towing fees from sobriety checkpoints, while police officers received an estimated $30 million in overtime pay.

According to a report combining 23 scientific studies conducted by the CDC (Center for Disease Control) checkpoints reduce alcohol-related crashes by about 20 percent while the CDC also states that sobriety checkpoints can potentially prevent 1 out of every 10 deaths caused by drunk driving accidents.

Should Minnesota get on the DWI bandwagon and implement dwi checkpoints or say no thank you and exit stage left?

4 thoughts on “Examining the Conflict and Costs of Sobriety Checkpoints”